Today we will look at the lineup and performance of the Maryland Terrapins. Friday we looked at the Virginia Cavaliers.

Sunny Jane was the lone goal scorer in the 15th minute against Virginia to close the score to 3-1 at that time. 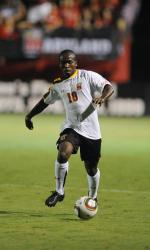 Maryland's Sunny Jane
The Maryland defense lost their marks easily and regularly – DC United reserves scored this way and the defense was abysmal against Virginia though the midfield was not very helpful, either.

In the 10th minute, Matt Oduaran outran DC United reserves center back Darnell Edwards to the ball, but provided a toothless cross. He had a header on goal from a Casey Townsend pass in the 16th minute against DC United reserves.  To be successful, Oduaran has to stretch the defense, using his speed and athletic ability to pull more players to cover him, allowing Townsend space underneath.

Townsend didn’t do enough to create his own shot in either game.

When Townsend came in to relieve an injured center back Alex Lee in the 10th minute against Virginia, this caused 5 player position changes.  Helge Leikvang moved to center back; Paul Torres moved to defensive midfield; Kaoru Forbess moved to right midfield; Patrick Mullins moved to left midfield and Townsend went to forward.  The third Virginia goal was scored almost directly after that.

I don’t believe that Will Swaim will be the starting goalkeeper for the entire fall.  He’s not a bad goalkeeper, but he doesn’t make that key save that’s necessary to win a big game. Zac MacMath, now in MLS, will be missed.

Taylor Kemp gave up a ball to Span that led to the second Virginia goal.  He had a much more difficult time marking Andy Najar than Hunter Jumper.  I consider this a good test for these 2 left backs against a legitimate MLS quality right midfielder.  Jumper passed; Kemp incomplete.

London Woodberry has been playing center back this spring after starting last year as right midfielder (beautiful crosses) then moving back to right back later in the year and eventually being removed from the starting line-up after a horrific game.  Against DC United reserves, he made some good defensive headers – demonstrating his athletic ability – including jumping over DC United reserves Pepito.  In the 33rd minute, Woodberry was dribbling deep into Virginia territory when Greg Monaco just wiped him out setting up a 30 yard free kick.

Kyle Roach looped the 30 yard free kick into the upper 90 in the 34th minute, but Virginia goalkeeper Matt Miscione easily tracked it down because it had too much air under it.

Against DC United reserves, Patrick Mullins had several driven crosses, but he wasn’t able to connect with his forwards.  His free kick in the 42nd minute against the University of Virginia was significantly off target.

Paul Torres found Jordan Cyrus in the box in the 28th minute against DC United reserves which led to a corner kick.  On the subsequent corner kick Sunny Jane served a sizzling corner kick to Paul Torres’ head back across the box to Jordan Cyrus who brought the ball down off his chest and volleyed a shot that the defense cleared for another corner kick.

In the final minute against Virginia on the bad end of a 4-1 score, Woodberry made a grass burning pass that Virginia goalkeeper Miscione came out to retrieve, but was upended by Jake Pace.  Forbess followed with a crushing shot into the fallen goalkeeper – but the whistle had blown for a Pace infraction.  I liked the Maryland spirit to continue to attack and the desire to continue to play regardless of the result.

Some details about the DC United Reserves at no extra charge!

The goal against Virginia was scored by Joe Ngwenya on a penalty kick in the 12th minute.  The play started with Daniel Woolard sending a long cross-field ball over to Andy Najar who calmly brought the ball down and crossed it into Matthew Mbuta in the box who was fouled.

The goal against Maryland involved Mbuta again.  This time he took a pass from Pepito and immediately gave it back to an open Pepito in the box who buried the 8 yard shot in the 14th minute.  The Maryland defense was missing.

Mbuta is a DC United reserves trialist that has previously played for Crystal Palace Baltimore and with MLS New York Red Bull.  He has skill, but is probably not an upgrade for any of the wide midfielders except for his quickness.

Trialist center back Darnell Edwards (formerly of North Carolina Wesleyan and Mercer) was galling in defense against Maryland.  He was gasping for air after 5 minutes.  I may be in better shape than him and I get winded working the remote!

The other trialists Pepito (former DC United Academy product known as Pepito Ebah) and Cristian Quinones were adequate with Quinones slightly better.  Neither center back trialist was near the talent of Julius James.

Conor Shanosky, signed right out of high school last year, played exceptional as a center back (converted from defensive midfield).  He was a beast in the air and I wouldn’t be surprised if he finds time with the first team this season.

I was extremely pleased to see Steve Cronin return from injury – though he had a heavily taped thumb and wrist.

18 year old Andy Najar was the most dangerous player on the pitch which he hasn’t been this year in first team action.  I think he’s coming back. A USSF Academy product, Najar recently announced he will play his international soccer for Honduras rather than the U.S.