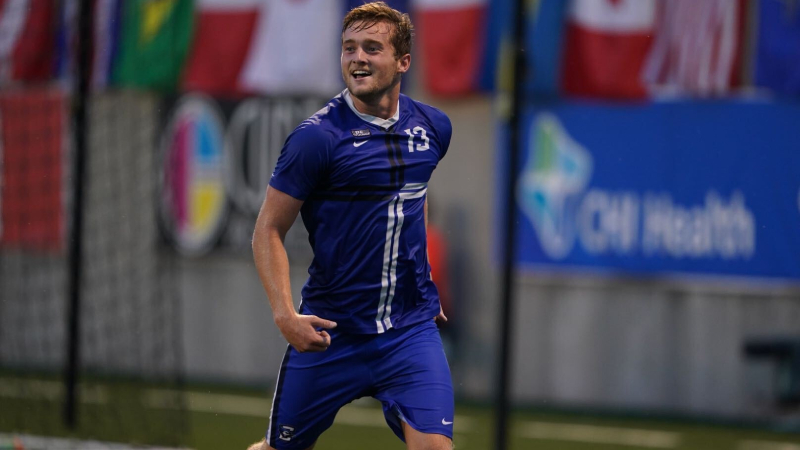 It was the full sequence that impressed Creighton coach Johnny Torres most.

Striker Duncan McGuire harassed a Duke defender by the corner flag, and forced an errant pass right to the feet of Charles Auguste. Before it lands at his teammate’s feet, McGuire was off, cutting toward the goal. He received the pass in full stride and struck the ball hard. It zipped in at the near post, rippling the net before the goalkeeper can move. Creighton led, 1-0, and would go on to beat the favored Blue Devils — and qualify for its first College Cup since 2011.

Therein lies the impact of McGuire. The Creighton forward leads the nation with 22 goals, and there’s been a method to his production. McGuire is constant movement, all action. And he might just lead Creighton to its first ever national championship.

McGuire has been the driving force for a Creighton side that has continued to surprise all season. Picked to finish fourth in the Big East, the Bluejays are now one of four teams remaining in the field. And although they are a well-rounded team — with a solid 3-5-2 system that has been difficult to break down — it’s their star man that has dragged them to some vital wins.

But for McGuire, it hadn’t always been like this. Prior to the 2022 campaign, the junior had five career goals to his name and wasn’t entrusted with a starting job until this year. But Torres and the coaching staff always knew that he could reach his level. For them, it was just. question of putting the pieces — pace, power movement — together.

“[McGuire has] always had the ability to break out,” Torres said. “It just took him a little bit. He's always been dangerous around goal. He's a pretty good finisher. I think what he was lacking was just a little bit of confidence.”

That confidence was found early in the campaign. McGuire kicked off his year by scoring five goals across the Bluejays’ first two games, highlighted by a hat-trick to open the season. Two of those three were remarkably similar, with McGuire making late runs to split the center backs, before adding a classy finishing touch from close range. His next two followed the same theme, with the tall center forward moving cleverly inside the box before outleaping an opposing center back.

A small goal drought followed, with McGuire only bagging one in his next six — a stretch where Creighton toiled to a 1-5 record. But his scoring touch returned shortly after, and the Bluejays remained in the Big East tournament hunt until the final day.

And then, Providence. A win or tie would send Creighton to the Big East Tournament — a seemingly simple task against a side that had endured such a sluggish season. But the Bluejays conceded three times in the first half and fell 4-2 to a 4-5-7 Friars team. That result took their Big east tournament hopes out of their hands — and appeared to have ended their season. But over in Milwaukee, Marquette was battering St. John’s — eventually clinching a 5-1 win to help Creighton to postseason play.

“Think that little bit of a scare, woke our guys up,” Torres said.

It certainly brought some life into McGuire. The striker scored four against Seton hall to open tournament play before bagging the eventual game winner against Georgetown to win the Big East tournament. His goal was a wonderfully worked thing. McGuire darted between two Georgetown defenders before taking the ball in stride. He ducked inside one Georgetown player before evading another, turning onto his weaker left foot. Then, off balance, he scooped it in, just out of reach of the opposing goalkeeper.

It was a confident finish, and McGuire hasn’t really slowed down since then. A brace against Washington and the opener against Duke have helped Creighton to a magical NCAA Tournament run. And this weekend, they have a chance to go further. There are other weapons on this team. Charles Auguste and Giorgio Orobo have controlled the midfield with aplomb. Goalkeeper Paul Kruse has made some dramatic saves.

But for the Bluejays, it all starts — and might just end — with McGuire.