The Pac-12, Big West, West Coast Conference, and many others kicked off play in conference games over the weekend, as the season within the season finally started.

In the Pac-12, UCLA continued to flex its muscle against the competition in a road swing through the Bay Area. A new program to the Big West took over the top spot after week one. And two Portland Timbers U23 midfielders are cutting up the competition in the WCC.

Something in the Water in Portland

Portland, Oregon locals Steven Evans and Erik Hurtado are tearing it up for their West Coast Conference schools. 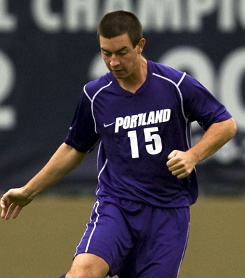 Evans, a junior at Portland (4-4-1), had a goal and an assist on Friday in a 4-1 win over Gonzaga (4-5-0). The local product leads the team in scoring with eight goals and one assist on the year.

After a rocky start to the season, the Pilots ended the weekend with a share of the top spot in the WCC after a win over San Francisco (3-3-2) on Sunday.

Hurtado, a senior at Santa Clara (5-4-0), recorded a goal in both of the Broncos wins this weekend. Hurtado also leads his team in scoring with seven goals and two assists on the year.

The Broncos have won four straight thanks to Hurtado and the contributions of a number of freshmen on the roster who have already played their way into starting spots.

Sacramento State’s inaugural campaign in the Big West was not met with high expectations. The Hornets (5-4-1) were picked to finish last overall in the Big West by the Preseason Coaches Poll.

The former MPSF side only garnered 12 votes from fellow coaches, but after the first weekend of conference play, the Hornets are top of the table with a 2-0-0 record following wins over UC Irvine (3-7-1) and Cal State Northridge(m) (7-4-0).

“After winning a big night game at UC Irvine, in front of a big crowd, we were worried about what kind of energy we would have today," head coach Michael Linenberger said after Sunday’s win. "We came out a little bit flat but after halftime we really turned it on. We possessed the ball and created some good chances. That effort carried through to overtime. We found a way to get it done and get six big points on the road."

The #6 UCLA Bruins (7-1-2) started conference play by extending two streaks. The defending Pacific 12 champions have won 15 conference games in a row dating back to 2010 after picking up road wins against California (6-3-1) and Stanford (4-5-0) over the weekend. The Boys of Westwood are also undefeated in their last 14 road games, which is remarkable when considering the opposition during that stretch.

"We are off to a good start in conference play with these two road wins," head coach Jorge Salcedo said after the match. "Scoring six goals in these games is a sign that we are heading in the right direction and we will continue to push and challenge ourselves during this upcoming week."

After battling a knack to start the season, it appears that CSU Bakersfield (4-1-4) star forward Gyasi Zadres is back to full health. The Los Angeles Galaxy Academy product had two goals and two assists in a 5-1 win over UNLV on Saturday.

The #27 Roadrunners lead the Pacific Division of the MPSF in the very early stages of conference play. New Mexico (8-1-0) and Air Force (4-5-1) are tied for the top spot in the Mountain Division after both teams won their opening games. The #5 Lobos host Air Force on Friday.