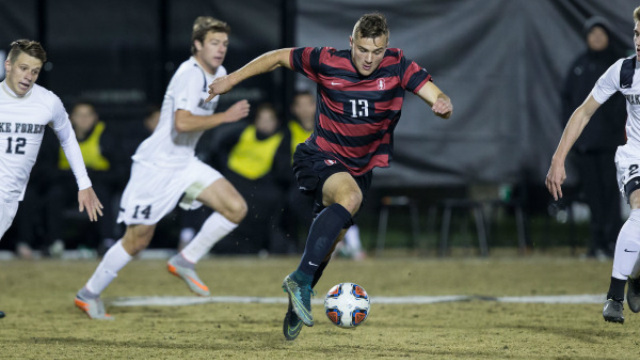 Just three minutes earlier, it looked like it would be Wake's night. Brandon Vincent earned a penalty kick four minutes into the first overtime, and the Cardinal captain stepped to the spot to put the game away. However, the senior's fiercely struck shot kissed the top of the crossbar and bounced out for a goal kick.

Thanks to the Portland Timbers Academy product's heroics a few minutes later, Vincent's miss didn't prove costly. After Ty Thompson won a foul a few yards into the Cardinal half, Corey Baird's looping ball found the head of Langsdorf, deflecting off Wake defender Kris Reaves and into the back of the net.

"When you come on the road against a very tough opponent, you want to take your chances," Stanford head coach Jeremy Gunn told reporters after the game. "When you miss, momentum can swing to the home team. But yet again our team showed its amazing mentality and incredible courage. We kept pressing and were rewarded with another great opportunity."

Despite navigating the cross country plane ride, Stanford started as the better side through long stretches of the first half. Disrupting Wake's high tempo style of play, the Cardinal broke through in the 18th minute. Baird's ball down the left flank found the surging run of Vincent, who sent in a pinpoint cross that found the head of junior striker Jordan Morris.

The Cardinal's success continued, and Morris should've had an assist five minutes later. He beat a couple of Wake defenders, and his cutback found Langsdorf near the penalty spot, but the sophomore could only rattle the crossbar.

After Stanford failed to find a second in the first half, Wake battled back, making inroads through Jacori Hayes, Jack Harrison and Ian Harkes. However, despite significant improvement, the Deacons failed to truly test Stanford goalkeeper Andrew Epstein.

Eventually, Hayden Partain won a penalty kick that Harkes cooly slotted home to tie the game. After that, the hosts looked the favorite to score, spuring a few late looks in regulation, including a golden chance for Harrison that he fired well high. Those misses proved costly when Langsdorf found the back of the net, booking Stanford's trip to Kansas City.

"It's an unbelievable achievement and feeling," Morris said of making the College Cup. "Last year we had a great regular season, went into the playoffs and lost in the first game. We knew we could do better, so it was exciting to see that we could come out and live up to the expectations. Obviously we're really excited for next weekend.

For Gunn, it marked a triumphant return to North Carolina. Back in 2011, he led Charlotte to the College Cup before departing to take over the Pac-12 power. Saturday's win was a special moment for not just him, but the entire collective.

"It's exciting for coaches, it's a wonderful reward, but the coolest thing is watching all the hard work the players put in, watching seniors out there that have grown to be unbelievable players that are revered the college over, after first coming in at a certain level, it's a special thing as a coach to see the players, the team come together, and it's the journey you go on," he said. "Every time we have another game, it means more time together as a group and more time to enjoy life with a real special group of guys."

It was evident after 102 minutes of soccer that little separated Creighton and Akron. With the score tied at 2-2 and penalty kicks looming, Adam Najem punched Akron's ticket to the College Cup with an exquisitive free kick that beat Bluejay goalkeeper Connor Sparrow.

The two sides traded blow after blow in Akron. After heading into the half tied at 0-0, a goalfest broke out in the game's final 30 minutes. First, it was Zip midfielder Victor Souto's penalty kick in the 60th minute that opened the scoring, only for senior midfielder Fernando Castellanos to answer back. Akron edged in front with 11 minutes to go when Stuart Holthusen took advantage of a misstep by a Crieghton defender. Again, Creighton had an answer. This time, junior midfielder Ricardo Perez finished off a nifty give and go with Fabian Herbers and Timo Pitter.

Najem finished things off just under two minutes into the third overtime, as the Zips returned to the College Cup for the first time since their 2010 title triumph.

A Polk hero in Syracuse

Just call him a Polk hero.

Forward Ben Polk added another huge goal to his young Syracuse career, scoring the only goal of the game as the ACC side booked its trip to the College Cup with a 1-0 victory over Boston College.

With goals in the ACC tournament semifinals and final already under his belt, Polk found paydirt for the hosts in the game's 79th minute. The Orange enjoyed a steady day of dominance, outshooting the Eagles 16-6 on the day, including 10 shots on frame.

Friday night's lone semifinal saw Clemson survive a first half Maryland barrage, before ramping up its game in the second half and eventually triumphing on penalty kicks after a 1-1 draw.

As they have at certain points in the season, the Terps created plenty but lacked that finishing touch in front of goal, outshooting the Tigers 8-1 in the first 45 minutes. But with the score locked at 0-0 still at the half, Clemson stepped up its performance after the break. The Tigers took the lead in the 58th minute through Thales Moreno's goal, only for center back Alex Crognale to equalize in the 73rd minute.

Neither side found the winner through 20 minutes of overtime, and Clemson held its nerve in the shootout, as Moreno provided the decisive spot kick for the win.