The start of conference play has arrived for many teams, which means lots of fun rivalries on the schedule and less big-time ranked fixtures. In fact, this weekend only features two games between two ranked teams.

That’s not to downplay the significance of the weekend, as there are a number of quality matchups on the schedule with a couple of them featured below.

The Hoyas host the Jays in the Big East showdown on Saturday in the matchup of the weekend. Creighton won its Big East opener over St. John's 1-0 last week thanks to a brilliant free kick goal from freshman Fabian Herbers in overtime. 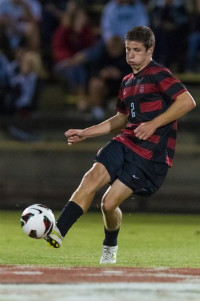 The Hoyas bring a four-game winning streak into the clash. Georgetown has matured since the opening weekend trip to Northern California, where the Hoyas lost to California but beat Stanford. Freshman center back Joshua Yaro has quickly emerged as a front runner for the Freshman of the Year award. His presence in the center of the defense has given the Hoyas a stout back line.

Creighton is also solid defensively, and will need to be against the highly successful pairing of Steve Neumann and Brandon Allen. Allen, a sophomore, leads the team in scoring with six goals on the season. Neumann has been the facilitator for that success.

The Jays counter with U.S. youth international Eric Miller and senior leader Zach Barnes – an impressive duo in their own right. Miller and Barnes will need to be sharp against the quick-hitting attack of Georgetown that looks even more dangerous now that Alex Muyl has stepped into a starting role.

The fixture can be viewed on a stream through the Georgetown site. The stream does require a monthly subscription.

NSCAAtv.com Game of the Week: UC Santa Barbara vs. Stanford

Last year, Stanford went into Harder Stadium and came out with a win in a game not many expected the Cardinal to have a chance in (this was before the late-season meltdown by the Gauchos).

With a national audience expected via the NSCAAtv.com stream, this could be UCSB's shot at revenge.

UCSB has muddled through an up-and-down start to the season with a quality win over Northwestern to begin the year and then close loses to Gonzaga, New Mexico, and UCLA to round out a 4-3 record.

Stanford rolls in with a four-game winning streak, which includes three shutouts from the relatively young Stanford defense.

Stanford midfielder JJ Koval is the key to the game. The senior from nearby Camarillo is the engine for the Cardinal attack with his tenacity in the tackle and keen ability to win every challenge in the air. If he wins the battle against UCSB’s Fifi Baiden, Drew Murphy, and Paul Ehmann, the Cardinal will be in good shape to capture wins in back-to-back years at Harder Stadium.

The counter is the home field advantage for UCSB. After a measly (by UCSB standards) 3,147 in attendance for the clash against New Mexico, how many Gaucho Locos will pack the stands on Friday night (the day after classes have started in Isla Vista)?

With the way the Northridge attack is rolling, Billings figures to be a key contributor on Saturday for the Braves.

The senior goalkeeper has 36 saves through seven games this season for the 4-2-1 Braves. At over six feet tall, Billings has the size to make the step to the professional level. He also had the experience of a four-year starter for the Braves, and has shown well during his time in the Missouri Valley Conference.

Billings will face a speedy Matadors attack that is among the best in the nation. Winger Beto Velasquez gets the spotlight this weekend. The elusive dribbler has enjoyed a great start to the season with two goals and four assists through eight games. Velasquez’s game is relatively easy to figure out, as he is a player who wants the ball on his feet and dribbling at the opposition.

Another impressive showing by Velasquez in a road contest will only help his draft stock come January.