Many times, when top teams meet in a huge matchup, the build up and hype can exceed how the game unfolds.

That was not the case when Maryland hosted North Carolina on Friday.

The two teams traded blows throughout the evening in what was a dramatic and waterlogged affair, featuring numerous goalmouth scrambles, several near scoring chances, and a saved penalty by Terps goalkeeper Keith Cardona with just under two minutes to go in the game.

To cap it off, the game ended with an overtime winner from Maryland forward Schillo Tshuma to seal the game for the Terps and hand them an advantage in the chase for the regular season ACC title. 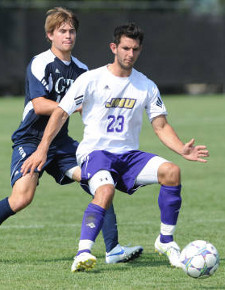 "This was a great game. It was a great advertisement for college soccer," Maryland head coach Sasho Cirovski said in a press release. "This was a real classic 1v2 game and this is one of those nights I'll always treasure.

Zips hold off challenge from the Mountaineers

When #2 Akron surveyed their conference schedule this fall, the biggest matchup on that part of the slate surely was Saturday’s game against West Virginia.

And the Zips responded to the high profile meeting, getting goals from Reinaldo Brenes and Scott Caldwell on either side of halftime to jump out to a 2-0 lead. That would prove to be decisive, as Majed Osman bagged a consolation goal in the second half for the Mountaineers.

As the race towards a Colonial Athletic Association tournament bid heats up, James Madison picked up a huge win on the road, coming from behind to defeat George Mason 2-1.

After the two sides battled through a scoreless first half, Mason struck first thanks to a Wesley Sever goal 49 seconds after the break. But the Dukes responded through Paul Wyatt’s 65th minute free kick, and Josh Grant was left unmarked at the back post to head home and keep the Dukes in third place.

Penn State’s 1-0 win in overtime on the road marked the first defeat in Big Ten play for Northwestern since Nov. 11, 2010.

"Northwestern has been undefeated in our conference for the last two years," PSU head coach Bob Warming said in a press release. "They deserved all those wins and today it took outstanding performances from our guys to pull off the win. I couldn't be prouder of them right now."

Hasani Sinclair scored the winning goal in the 104th minute, as Penn State gave life to their NCAA tournament hopes and aspirations.

In the battle for the Ivy League title, advantage to Brown.

That’s the case after the Bears defeated Cornell 2-0 on Saturday, putting an end to the Big Red’s winning streak that had stretched to 12 games prior to the loss. Along with it being the first loss of the season for the Big Red, it also marked the first game all season where Cornell failed to score in 2012.

Pushovers no more, with a 2-0 win against DePaul over the weekend, the Orangemen officially punched their ticket to the Big East conference tournament.

"I'm so proud of the guys," SU head coach Ian McIntyre said in a press release. "We have played three very tough games this week with two very emotional games on the road. The character, resolve and resilience were certainly there."

Seattle Sounders Academy graduate Sean Okoli scored three times as Wake Forest maintained its spot in third place in the ACC thanks to a 3-1 win over North Carolina State.

Okoli opened the scoring in the first half, and added his two other goals of the game after the Wolfpack grabbed an early second half equalizer.