After opening his collegiate account during the second game of the season, freshman forward Brandon Allen can’t stop scoring.

Allen scored the only goal in a 1-0 win against Cal State Northridge on Friday. He followed that up with the decisive tally in a 2-1 defeat of Penn State the following Sunday.

"The way the calendar falls, we've played three games this week and Brandon has won all three games with the game winner," Georgetown Head Coach Brian Wiese said after the Penn State win. "For a young guy to come out and do that is pretty special and all of his goals were great goals. The nice thing is that Brandon's getting goals, Stevie (Neumann) is going to get his goals, we have to make sure we have multiple weapons up there since that is the nature of the game."

The Hoyas head on the road for the first time this coming weekend, with stops at UIC and Wisconsin. 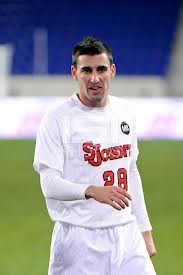 UCLA mustered a strong start against No. 3 Maryland on Friday night, pushing the Terps to the limit in a 2-2 draw. John Stertzer’s second half penalty kick provided the tying goal.

After the tie, Maryland bounced back against California, running away with a 6-0 win.

“"I thought it was a tremendous 90 minutes. That's a very good Cal team and I expect them to be a playoff team this year," Maryland head coach Sasho Cirovski said after the win over Cal. "The honesty, the work ethic, the attention to detail, and the skill on the ball was just outstanding.”

Jordan Cyrus scored twice, while Patrick Mullins, Schillo Tshuma, John Stertzer and Tsubasa Endoh all were on the scoreboard.

The No. 23 Demon Deacons concluded its three-game season opening home stand with three wins after winning twice against Boston University and West Virginia.

Michael Gamble’s two goals led the way in a 3-1 win over the Terriers to get the weekend stretch started off right.

“"I'm happy with the result, and happy with Mikey's (Gamble) play,” head coach Jay Vidovich said in a press release after the win against Boston. “He was fantastic tonight and put us on his shoulders, actually."

Sam Fink scored in the second half to grab the 1-0 result against the Mountaineers in the other game of the weekend.

Winning away from home in the college game is never easy, but the No. 2 Huskies managed to find the right formula in a road opener against Michigan State.

It wasn’t by the biggest of margins, but Allando Matheson scored a second half goal that stood up to be the difference in a 1-0 win on Monday. It made it two wins from two over the holiday weekend, after Matheson and Mamadou Doudou Diouf scored in a 2-1 overtime win versus Dartmouth.

A trip to South Carolina proved to be a fruitful one for the Red Storm, as the team emerged unscathed with two more wins under its belt.

Nick Matthews scored two goals late on in order to secure an opening win over South Carolina, before Jack Bennett’s late penalty kick proved to be the difference in a 2-1 win against Kentucky on Sunday.

"I thought we exhibited another total team effort today and had a lot of guys contribute to this result," head coach Dr. Dave Masur said in a release after the Kentucky win. "We did a good job of maintaining possession and controlling the game and we are happy to come home with a pair of wins on our first road trip."