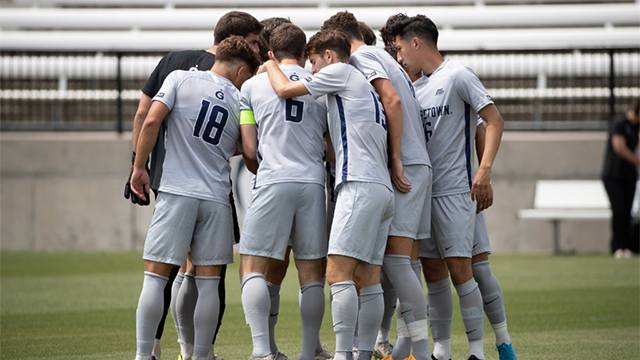 The men’s Division I NCAA tournament continues on Thursday. Check out a preview of all eight matches.

Another massive test for the defending champions looms in the third round, as a quality Penn State will push the Hoyas. Big saves from Giannis Nikopolidis helped pave the way to a close battle with High Point in the second, while Chris Hegardt and Zach Riviere paced the attack. Georgetown has the quality and doesn’t give up a lot of chances, even with a lot of the big players moving on to the pro ranks. Daniel Bloyou’s emergence has been huge, as Liam Butts is now coming off the bench after getting injured this year. Freshman Peter Mangione helps to engineer the attack. Being clinical against the Hoyas is going to be critical for the Big Ten side’s chances of a win.

Two programs that have shown consistency and excellence in the past few seasons square off in Cary, looking to keep things going. Washington can get the job done on both sides of the ball, whether it’s Kendall Burks or Ryan Sailor locking things down at the back, or Charlie Ostrem setting up Dylan Teves in front of goal. Missouri State needed a last-minute comeback to beat Maryland, but have a number of guys that can step up offensively: Nicolo Mulatero, Jesus Barea and Aadne Bruseth can all score or create chances. Like many other games at this stage of the season, this one could come down to set pieces.

The clash between the Conference USA squad and the No. 1 overall seed for the tournament should be a tight, close affair. Clemson certainly have the pedigree, as ACC champs, a talented squad despite some losses to the pro ranks, and a pair of freshmen in Hamady Diop and Ousmane Sylla that have helped fill in the gap in the spring. Mohamed Seye could be a critical figure going forward, as he can bring a real quality and physicality on the field. Marshall’s Milo Yosef burst to life with a brace against Fordham, as the Herd needed overtime in the second round. The quality and experience is there for Marshall, that if they play well, a win could be within reach.

After a scuffling start to the spring season with one win from the first four games, UCF haven’t lost since February 27 and face one of the best teams in the tournament in Pitt. Whether it’s been fall or spring, the Panthers have looked every bit of contenders, save for when they line up against Clemson. Bottling up Gino Vivi and Lucca Dourado will be crucial, and UCF does have an impressive spine in the form of goalkeeper Yannik Oettl, Yoni Sorokin and Yanis Leerman. Pitt’s experience is going to be a factor both in this game and if they advance; seniors like Bryce Washington, Jasper Loeffelsend and Nico Campuzano have been a big part of this season’s success.

Two sides that like to sit in and control the game, it will be intriguing to see if UNC can raise their game against a Stanford side that’s had another strong year. While the Cardinal aren’t quite at the same level as they were a few years ago, they are still a formidable force. Zach Ryan’s emergence as the go-to goal-scorer has been important without Ousseni Bouda, while Keegan Hughes sits in as the defensive anchor in front of Andrew Thomas. The Tar Heel approach here is going to be fascinating. It’s been an up-and-down fall/spring campaign for UNC, and with a quality goalkeeper like Alec Smir, there is reason to believe they can sit in and be clinical. If the Stanford offense gets going, it could be difficult for UNC to keep up.

The Hoosiers haven’t lost in nine games they prepare for a matchup against a familiar foe – albeit not in the current season, when neither side played anyone out of conference in the spring. Perhaps the biggest concern for Indiana, at least in the past two games, is the lack of a goal-scorer aside from Victor Bezerra. In both the Big Ten final and second round of the tournament, the Hoosiers needed penalty kicks to best Penn State and St. Francis Brooklyn. Marquette has a good defensive record and knows how to protect a lead; goalkeeper Chandler Hallwood has been quite the addition after transferring from Division II program Gannon University, while Lukas Sunesson leads the program with six goals.

Often presumed as the premier conference in men’s DI soccer, the ACC reputation can really be underlined here if Virginia Tech finds a way past the Big East tournament champs. Kristofer Strickler hasn’t been as prolific in past seasons, although fellow senior Jacob Labovitz has stepped up at the right time to provide big goals. Their defeat of Oregon State in the second round is certainly a big confidence boost. The Pirates had a dramatic win of their own, edging Air Force on a late CJ Tibbling goal. The Swedish striker is a point of focus and is going to be important to their attack as usual.

Now getting healthy and at full strength down the stretch, Wake Forest survived a tough test against Coastal Carolina over the weekend. Omar Hernandez’s brilliance could tilt the field towards another College Cup appearance, but Kentucky is the first team standing in the team. Bailey Rouse and Marcel Meinzer are a difficult midfield to parse through, and Enrique Facusse remains ever-present in goal for the Wildcats. If the Wake attack is clicking, Facusse will need to make big saves on Hernandez or Kyle Holcomb to keep UK in the mix.