Division II women’s soccer could soon bear witness to history. No. 1 Grand Valley State is 10-0-1 and is now the last college soccer program in the country at any level to not have conceded a goal this season. That’s 11 shutouts to open the year, and it’s inching the Lakers ever closer to the DII record of 15. Should they do it, they’d break the record on the penultimate game of the regular season against Ferris State on Oct. 30. Heady days. 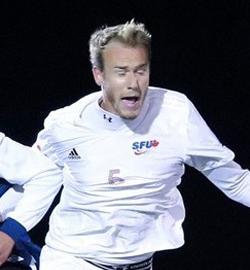 The men’s Division II No. 1 hasn’t been as lucky. After ascending to the top spot with a bevy of blowouts in tow, Canadian outfit Simon Fraser lost for the first time to Seattle Pacific on Oct. 3. That dropped the Clan to No. 9 last week, opening the door for LIU Post to hop into the top spot. Rollins scooted to No. 2 with a similar perfect record, creating a shift in the top 10 that’s shaken things up this week.

Here’s a look at a few other stories of interest from last week in Division II soccer.

Through last weekend, there were just two teams in all of college soccer (on any level) that hadn’t yet conceded a goal. As of the start of this week, Saint Rose is no longer in that pantheon. The Golden Knights opened the season with an incredible 11 consecutive clean sheets, which was creeping closer to the Division II record of 15 set in 1995. But Mercy had other ideas.

Then-No. 3 Saint Rose defeated Mercy 3-1 on Monday to move its record to 11-0-1, but the Golden Knights had to grit this one out. Mercy leveled at 1-1 in the 18th minute behind a goal from Crystal Mena to snap shut Saint Rose’s shutout streak at a whopping 1,028 minutes. It was Mercy’s only shot on target all night. Showing resolve, the Golden Knights responded with goals from Emily Meeks and Kristin Carr in the second half to keep momentum churning. The shutout streak may be gone, but the unbeaten one is not.

It wasn’t a good week to be a favorite in men’s action last week. Then-No. 6 UC San Diego lost 1-0 to Cal State Chico in overtime. No. 8 Rockhurst dropped a 2-1 decision to Missouri-St. Louis to lose its first league contest of the year. No. 3 Lander was rocked in a shocking 3-0 loss to UNC-Pembroke. It was Lander’s first loss of the season, and it came in a Peach Belt Conference game, no less. No. 4 Notre Dame (Ohio) suffered a 3-2 defeat against Charleston (WV) on an 89th-minute goal. And No. 5 Northwestern State(m) lost 2-1 to Midwestern State in overtime.

The carnage was total. All told, five of the top 10 lost last week, including the Nos. 3-6 in last week’s poll. The topsy turvy nature of men’s Division II soccer this season assures that the playoffs will be an entertaining free-for-all.

The Peach Belt Conference is a notorious grinder in women’s college soccer. With programs like Armstrong Atlantic, Clayton State and Lander reloading every year, it makes it hard on teams to stay at the top of the heap. Columbus State has had no such troubles this season. The Cougars have scythed through the league with impunity this season, jumping out to a 6-0 start and rocketing into the national top 10.

The gathering momentum included the Cougars’ slate last week. On Wednesday, Columbus State eased past Georgia Southwestern 10-0, the third-most goals in a single game in program history and the most in five years. The last win came just days later on more exciting terms. Columbus State and Flagler entered the final 10 minutes scoreless, but the Cougars got three goals in the last eight minutes to plump their record to 9-3-0 overall. They haven’t lost since Sept. 22 and show no signs of doing so.