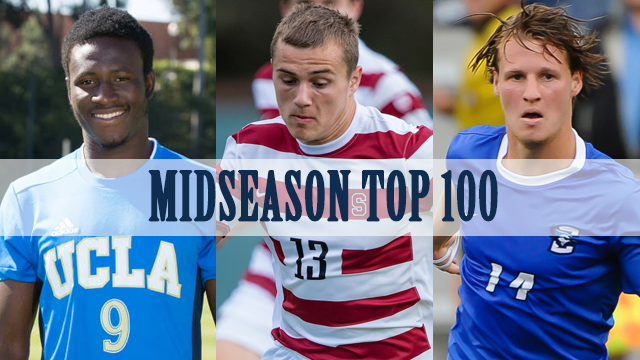 The TopDrawerSoccer midseason update is out for the men’s national top 100 players. Stanford star and U.S. Men’s National Team forward Jordan Morris remains in the top spot in the new update. Morris leads the Cardinal with six goals in nine appearances this season. He is one of four Stanford players to make the top 100.

Georgetown(m) standout Joshua Yaro comes in at No. 2. Yaro is leading the Hoyas back into the top of the rankings with his recent play. The Big East side has been on fire recently thanks to Yaro’s play from center defense.

Creighton senior Fabian Herbers jumps to No. 3 in the updated rankings. Herbers is bossing the men’s game right now with 11 goals and seven assists in 14 appearances. His play has Creighton ranked as the top team in Division I.

UCLA(m) forward Abu Danladi checks in at No. 4. The sensational sophomore has been slowed by injuries, but recent games have given a glimpse to the potential he has as a game-changing talent.

Wake Forest(m) senior Michael Gamble climbs up to No. 5. Gamble and the Demon Deacons are having a dream season with first-year head coach Bobby Muuss leading the way for the group. Gamble has four goals and nine assists this season.