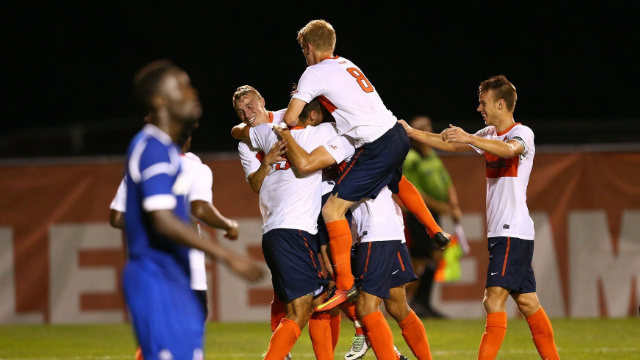 This weekend could be a College Cup preview in men’s Division I soccer. No. 1 Syracuse hits the road to take on No. 2 Notre Dame in South Bend on Friday night. The Orange are off to their best start in program history with an 8-0 mark. Miles Robinson and the Syracuse defense has been one of the stories of the early part of the season. Syracuse has only let in four goals through eight games. Goalkeeper Hendrik Hilpert is averaging less than two saves per game. The dominant defense has Syracuse in line as one of the favorites for a trip to Houston in December through the first month of the season.

Notre Dame enters Friday game with eyes on bouncing back from the 0-1 loss to Louisville last week. The Irish are 6-1 on the season and have only let in three goals through seven games. The Irish midfield has been the key to the success. With a dominance through the center channel, the Irish have been able to control the game and find success through the early stage of the season. Senior center back Brandon Aubrey is one of the favorites to win the Player of the Year. Aubrey has been magnificent leading the Notre Dame defense, and almost equally as good in the attack from set pieces.

Friday’s game is going to boil down to Syracuse limiting the set piece opportunities for the Irish with solid defending and limited service into Jon Gallagher and others in the attack. Syracuse, the No. 1 team, has the benefit of a dynamic attack that could trouble the Notre Dame defense in a variety of ways. Freshman Johannes Pieles has shown his quality this season with three goals and three assists from eight appearances. Pieles is not the only quality freshman in this game. Notre Dame midfielder Tommy McCabe has been terrific for the Irish with ability to cleanly win the ball and then distribute to the attacking talent.

Outside of the battle between the top two teams in the country, Louisville’s battle against Virginia on Saturday is another marquee game to watch. The Cardinals are coming off a big week with wins over Notre Dame and Saint Louis last week. The Cardinals defense has been the story with four shutouts in a row. That record will be tested on Saturday with sophomore sensation Edward Opoku and the Virginia attack coming to town. Opoku and the Cavaliers scored three goals against Clemson in a wild one last week.

There are nine teams left in Division I men’s soccer with an undefeated record. Syracuse and Loyola-Chicago stand out from the crowd as the only two teams with perfect records - no losses or draws. One of the nine with an unbeaten mark is San Diego State, which takes on a challenging slate of games this weekend. The Aztecs face Pacific on Friday and then battle local rival San Diego on Sunday. The local derby will be the one to watch as the Aztecs hope to enter conference play with an unbeaten record.