It was set up to be a wild final weekend of Big East Blue Division action, and the trio of matchups with title implications delivered.

With four teams vying for at least a portion of the division crown heading into Saturday’s regular season finale, Georgetown and Connecticut emerged victorious to share the conference title, while a draw between Notre Dame and Marquette ruled out a third team grabbing a slice of the pie.

Dramatic circumstances plagued the Hoyas throughout their meeting with Seton Hall on Saturday, as they missed a pair of penalty kicks before Brandon Allen scored the game’s only goal late in the second half. 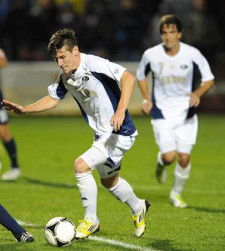 While it was Allen the freshman who delivered the goal, it was the instrumental play of seniors Ian Christianson, Tommy Muller, Jimmy Nealis and Andy Riemer who also played a big role in not just the win, but also the regular season title.

"It's no small feat winning the regular season and whether we end up being the outright winner or sharing it with somebody, I think it's very fitting that this is our seniors' second title in the last three years and they played a major role in both," Hoyas head coach Brian Wiese said after the game. "It's great for these guys and it's validation of the quality that they are and the character they have and I'm really happy for them."

Meanwhile, Connecticut had opened the door for Georgetown with a surprising mid-week loss to Providence, and would now need to match Georgetown’s win in order to grab their share of the title. A win would also secure it the top seed in the division by virtue of a head-to-head win over the Hoyas.

Senior Carlos Alvarez and junior Mamadou Diouf delivered, each tallying a goal on either side of halftime in a 2-0 win against the Friars.

And the final important Big East match of the day saw Notre Dame forward (and TopDrawerSoccer.com Player of the Week) Ryan Finley cancel out a goal from Marquette defender Axel Sjoberg to secure a 1-1 draw, limiting the championship to just the other pair of Big East programs.

"We showed a lot of character in the second half," Notre Dame head coach Bobby Clark said in a release. "I felt a tie was a fair result for both teams. It would have been unfortunate had we lost and it was looking like that might be the case with three minutes left. I was happy with how we got after it in the second half, but we just couldn't get it going in overtime."

By virtue of Saturday’s 2-2 draw against Clemson, #1 Maryland ensured themselves the ACC title.

However, the tie was hardly convincing, and in some ways, a disappointment for the Terps after jumping out to a 2-0 lead, and looking prime to cruise to a win and set a record for the best ever start.

But the Tigers had other ideas, scoring twice in the second half to deny the top team in the country. The Terps still managed to hold on for the draw, and the point officially securing first place in one of the most competitive conferences out there.

"I'm delighted that we ended up getting a result that allows us to achieve our first goal this year which was to be ACC regular season champions," head coach Sasho Cirovski said in a release. "I thought we played well in the first half again, came out strong in the second half and then I think what you saw was a team that was very mentally and physically tired.

"Credit to Clemson. They are an extremely hard-working team and very direct and we didn't deal very well with their counters and direct play. I think physically we were exhausted and we are going to correct that.”

Few things in college soccer are as constant and reliable as Akron’s dominance of the Mid-American Conference.

In Caleb Porter’s final season in Ohio, little has changed as the Zips officially clinched another MAC regular season title, thanks to a dominant 4-0 defeat of Hartwick. It’s what we’ve all come to expect from Porter’s kids, and the question is now whether or not they put it together for a run in the NCAA tournament.

The dominance this season has been impressive once again, as Akron – with one more conference game left – is 6-0 in the MAC, outscoring other teams by a combined 19-1 mark.

Big Ten still up for grabs:

Does any team want the Big Ten regular season title?

It was far from apparent over the past weekend, as Penn State, Northwestern and Indiana all missed chances to grab the inside track on the regular season mark.

The Nittany Lions survived a wild tie against Ohio State, in what finished as a 4-4 draw in double overtime. With a win, Indiana would have set itself up nicely going into a final match against the Wildcats, but slipped up and lost 3-1 against Michigan State. And with a 0-0 draw, Northwestern remained behind Penn State in the standings.

So in the aftermath of that, Indiana still has a chance to win the Big Ten outright if they can defeat Northwestern at home this coming weekend, while Penn State would finished tied with the Wildcats in the event of a draw, as the Nittany Lions have wrapped up their regular season schedule.