Men’s Team of the Week: Comeback and Glory However, it was a player who returned from injury that claimed the Player of the Week. 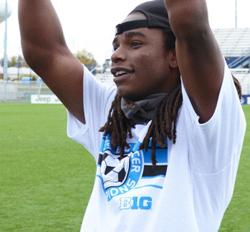 Penn State redshirt-junior Jordan Tyler scored two goals in a 2-1 double overtime victory over Northwestern on Sunday to help the Nittany Lions claim the Big Ten regular season crown. Tyler missed 2012 with a knee injury and has returned to Penn State this season with authority. The forward has four game-winning goals in 14 games.

GK Jake Fleener, Seattle – The nation’s leader in saves continued to pick up blocks over the weekend with 14 in two games. Fleener made six on Friday in a 1-1 draw with Air Force. He followed that up with eight on Sunday in a 3-0 win over Grand Canyon.

D Rylee Woods, Michigan – The Wolverines defender provided the assist on the game-winning goal against Indiana, which was the first win for Michigan over Indiana in Ann Arbor. Woods logged 90 minutes in that game, which saw Michigan change keepers at half due to an injury.

M Dan Metzger, Maryland – Scored a wonder goal on Saturday to give Maryland a 1-0 win over Syracuse on the road. He was also a key contributor to the 1-0 win over Drexel on Tuesday.

M Laurie Bell, Wisconsin-Milwaukee – Scored the game-winning goal against Oakland on Saturday for his tenth tally of the season. He also scored the lone goal in a 1-1 draw against Wisconsin earlier in the week.

M Ian Harkes, Wake Forest – The freshman midfielder had an assist against Davidson in a 4-0 thrashing during the midweek out-of-conference tilt, and then followed that up with two assists over the weekend in a 2-2 draw against Duke. The Demon Deacons are still undefeated in ACC play.

M Darius Madison, Virginia – The winger scored both goals in Virginia’s 2-0 win over Notre Dame on Saturday. Madison’s tallies were unassisted as he victimized the side of the Irish defense.

M Connor Brandt, San Diego – In the biggest upset of the weekend, Brandt was the difference. The midfielder scored the lone goal in San Diego’s 1-0 road victory over then No. 1 California on Friday.

F Denzel Clarke, Gardner-Webb – The junior forward recorded a hat trick in a 5-0 win over UNC Asheville. He leads the nation in goals scored with 15 to his name this season. He also had an assist on Saturday in a 2-0 win over Campbell.

F Stephen Baker, Penn – The Quakers forward had a goal and two assists in a 3-2 overtime win over Yale. Bake scored the game-winner when he pounced on a blocked shot.

F Kyle Parker, Charlotte – The sophomore scored two goals in the 3-1 upset victory over Clemson last week. He was named the Conference USA Offensive Player of the Week for his contributions to the squad.