There was a common theme for all the quarterfinal winners over the weekend; a sophomore or freshman was leading the way. An underclassman tallied the game-winner in each of the four games to send their teams to College Cup. This week’s Team of the Week reflects the influx of young stars in the college game. 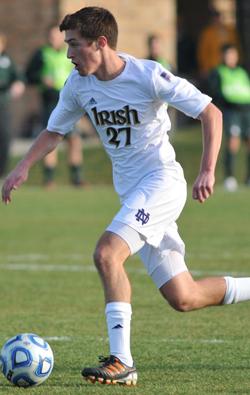 The Player of the Week is a rising talent as well, as Notre Dame sophomore midfielder Patrick Hodan claimed the honor. Hodan had a strong outing against Michigan State on Saturday that was capped with the game-winning goal early in the second half.

Find out who joined Hodan on the Team of the Week below.

GK: Michael Lisch, New Mexico: Lisch was the only goalkeeper to record a shutout in the quarterfinals. He made three saves, but more importantly, he dealt with the flip throws with the maturity that Lobos fans hoped for heading into the game.

D: Zachary Carroll, Virginia: The sophomore provided the assist on the game-winning tally and helped anchor a defense that only allowed Connecticut to place three shots on goal. Carroll, along with all 11 starters for Virginia, played all 90 minutes in the win.

D: Mikey Ambrose, Maryland: Ambrose had the assist on the opening goal for Maryland on a perfect service from a free kick. He also cleared a shot from the mouth of the goal in the first half after it hit both posts. The outside back was a key part of Maryland’s success against California.

D: Kyle Venter/Nick Miele, New Mexico: The two New Mexico center backs earn a joint spot on the team of the week for shutting out Huskies at home for the first time this season. Venter and Miele have been impressive this postseason and continue to shut down the opposition.

M: Jordan Allen, Virginia: Allen scored the game-winner in remarkable fashion with an overhead kick midway through the second half. The freshman also put four shots on frame, as he tested keeper Andre Blake throughout the game.

M: Patrick Hodan, Notre Dame: Hodan delivered one of the best goals of the round, and it proved to be the game-winner for the Irish in a 2-1 victory over Michigan State. The midfielder whirled and eluded defenders before driving a shot into the lower corner of the net. He also logged 83 minutes of play to help Notre Dame capture the win and move onto the College Cup for the first time in program history.

M: Michael Sauers, Maryland: With a sweet strike, Sauers placed himself in the lore of Maryland soccer and booked a trip to Philadelphia for the Maryland Crew. The freshman’s long-distance tally late in the second half stood up as the game-winner against the Golden Bears and marked the first NCAA Tournament loss for Cal at home.

M: Ben McKendry, New Mexico: McKendry finished off a pass from Oniel Fisher for the lone goal of the game between New Mexico and Washington. The sophomore’s tally highlighted a first half that the Lobos dominated with a 10-1 advantage in shots at the break.

M: Jay Chapman, Michigan State: Chapman was all over the field on Saturday as he tried to will his side into College Cup against a formidable Notre Dame side. The sophomore scored the lone goal for Michigan State, but he could not punch in an equalizer late.

M: Oniel Fisher, New Mexico: Fisher is now coming off the bench after starting at outside back for the early part of the season, but the new role seems to be working out just fine. He scored a goal in the previous round against Penn State and provided an assist on Saturday after only being on the field for a few minutes.

F: Stefano Bonomo, California: For the most part, Bonomo was just unlucky. If a couple of his shots are just a few inches to the right or the left, California is headed to Philadelphia. The striker was a handful for the Maryland defense, but the posts were not his friends on the day. He still managed to put one in the back of the net for this sixth of the season.