Men’s Team of the Week: December 7 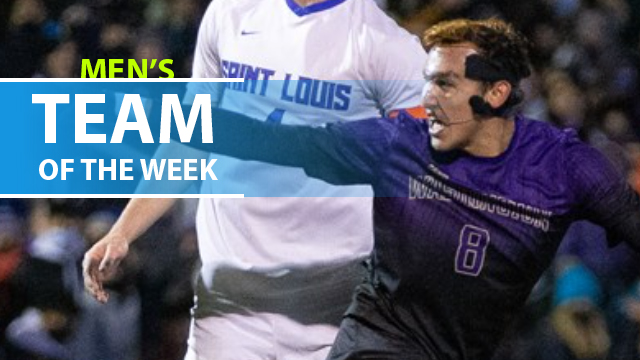 Three of the four men’s DI quarterfinal matchups were decided on penalty kicks, making it a good weekend for goalkeepers.

But the winner of the final men’s Player of the Week nod goes to the one player (and team) that found the back of the net twice. Raul Giovanni Miglietti’s quick-fire double powered Washington to the first College Cup in program history, winning 2-0 against a very good Saint Louis squad.

✔️ The Goal.
✔️ The Celebration with Husky Nation.

Up 2-0 at the half thanks to the masked man Raul Giovanni Miglietti!#GoHuskies pic.twitter.com/WqMXNnTjui

Check out some of the other top performances from the past week of action in the final Team of the Week of the 2021 season.

GK Giannis Nikopolidis, Georgetown – Ever-reliable in goal for the Hoyas, Nikopolidis helped the Hoyas punch their ticket to Cary with a strong game against the Mountaineers. He made a couple of good saves during the game with Georgetown down 1-0. In the shootout, he made two saves as the Hoyas triumphed 4-1.

D Achille Robin, Washington – A huge success for the Pac-12 side after transferring from Bowling Green, the French defender was on form, helping keep the shutout in a 2-0 win over Saint Louis.

D Joshua Ramsey, Notre Dame – The freshman put in a shift against Pittsburgh, winning 91% of 11 challenges and reliable on the ball when needed.

D William Sands, Georgetown – The marauding left back was a touch out of position on West Virginia’s goal. But he made up for it in the second half, winning a penalty in the second half that was converted by Dante Polvara.

D Paddy Burns, Notre Dame – Trailing 1-0, the left back popped up to score the tying goal. In the penalty shootout, Burns converted his chance on the way to Notre Dame’s triumph.

D Oskar Agren, Clemson – Down by a goal with five minutes left, Agren won a penalty kick from a set piece. He was solid in his 110 minutes on the field, and then converted his spot kick in the shootout as Clemson triumphed after the 1-1 draw.

M Dante Polvara, Georgetown – With his team trailing in the second half, Polvara had ice in his veins to tie the game from the penalty spot. He was imperious against WVU, winning 66% of 29 challenges and leading the team with four key passes.

M Ike Swiger, West Virginia – Despite his side coming up short on penalties, Swiger certainly threw this game for a loop by setting up WVU’s first goal of the game. While he didn’t convert his penalty kick, he had two key passes and won 52% of 21 challenges.

M Luis Felipe Fernandez-Salvador, Clemson – Just when it looked like Oregon State was going to hold on for the win, Agren drew a penalty with five minutes left in the game. Fernandez-Salvador kept his nerve and tied the game from the spot, and the Tigers were able to win in the shootout.