Men's Team of the Week: November 10 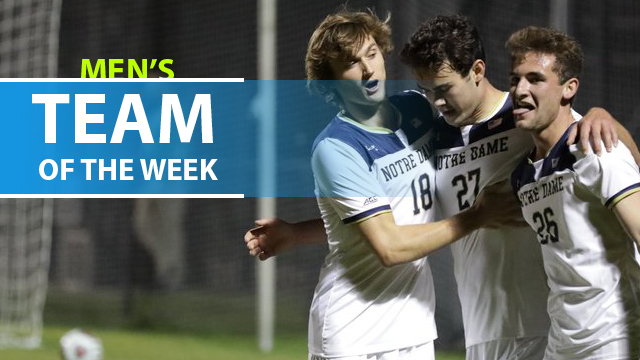 While there were only six games played over the past week in men’s Division I soccer, the Team of the Week returns once more.

The Sun Belt Conference and the ACC are the lone two leagues to push on and play through the pandemic, with both heading towards their respective conference tournaments.

One team that notched a massive win is pushing on towards the postseason looking to make a run in the ACC. Notre Dame beat Louisville by a 4-1 score on Friday, powered by a Jack Lynn hat trick. The junior’s three goals were sufficient to take down the Cardinals at home.

Jack Lynn with the first ND hat trick since @JonGallagher96 vs. BC in 2017!#GoIrish☘️pic.twitter.com/SvUV2zxYpI

Check out some of the other top performances from last week’s small slate of men’s Division I soccer games below.

D Matthew Constant, North Carolina: With a zero on the board, the Tar Heels were able to best rivals Duke as a pair of goals led the to the win. Once again, Constant was at the heart of it all to help UNC secure the three points.

D Garrison Tubbs, Wake Forest: The talented freshman’s strong season continued, as he played 86 minutes in Wake’s 2-0 win over NC State. The defense limited the Wolfpack to just three shots on the night.

D George Proctor, Georgia State: A goal from the defender provided the winning margin for Georgia State as the end of the season draws near.

M Daniel Pereira, Virginia Tech: The sophomore midfielder bagged the game-winning goal as the Hokies edged in-state rivals Virginia by a 1-0 score on Friday in Charlottesville.

M Benjamin Giacobello, Notre Dame: Along with Lynn’s hat trick, Giacobello accounted for the other goal in Notre Dame’s win. He also had an assist on two of Lynn’s goals.

M Marcello Jones, Coastal Carolina: The junior from England scored a goal and was credited for an assist in CCSU’s 3-0 win over Georgia Southern.

M Mayola Kinyua, Virginia Tech: Like Pereira, Kinua was a big part of the win on Friday against Virginia. He also excelled in last Monday’s 1-0 victory against the Irish.

F Kyle Holcomb, Wake Forest: A junior from California, Holcomb’s quietly enjoyed a strong season in the ACC. He scored and added an assist versus NC State on Saturday, his fifth goal in nine games in the fall of 2020.

F Jack Lynn, Notre Dame: With the three goals on Friday, Lynn double his goal output for the season, with six from six games. The Irish can go as far in the ACC tournament as the striker can take them.