Men’s Team of the Week: November 20 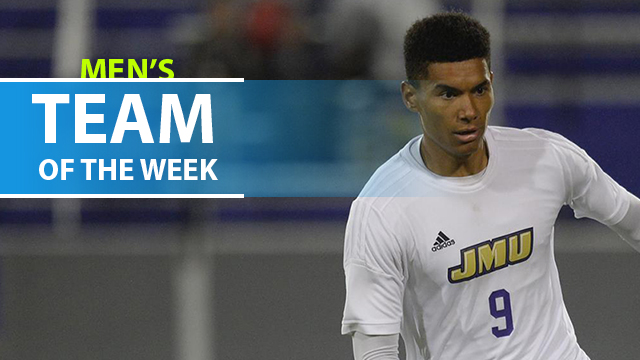 The Dukes are still dancing.

James Madison picked up two wins in the first two rounds of the NCAA tournament, beating High Point by a 3-0 score on Thursday and then picking up a 2-1 victory over College Cup contenders North Carolina.

English senior Aaron Ward-Baptiste played a significant role in each win. He scored the opening, and what proved to be winning, goal against High Point in the first round. Then, he was in the right place at the right time to punish the Tar Heels for a series of defense errors in the second half.

He wasn’t the only player to enjoy a strong week in the men’s DI tournament. Check out some of the other top performances below.

GK Christopher Zappia, Lipscomb – Lipscomb’s two victories were arguably the most impressive of the past week. After logging 110 minutes and advancing on penalties against Washington, the Bisons flew to Orlando and beat UCF in overtime. Zappia played 207 minutes, making 16 saves across the two games (even though he was replaced for the shootout against UW).

D Abdi Mohamed, Akron – Slotted in as a right back for Akron this season, Mohamed’s steadied as he adjusted to a new position as a senior. This week was one of his brightest on both sides of the ball, as he helped keep Rider at bay in a 3-1 win on Thursday, before scoring and setting up another in Sunday’s win over Syracuse.

D Dylan Nealis, Georgetown – Facing a tough and determined West Virginia at home, Nealis scored the lone goal in the last few minutes of the game, securing a 1-0 win and advancement to the third round. He played the full 90 at right back, helping the Hoyas keep a valuable clean sheet.

D John Freitag, Michigan State – After helping the Spartans to a 2-0 shutout win in Thursday’s tournament curtain-raiser, Freitag scored the game-winning goal three minutes into overtime to grab a 2-1 win against Louisville.

D Tanner Beason, Stanford – The junior left back earned Pac-12 Player and Defender of the Year and showed why in Sunday’s opener. Helping to limit a dangerous UC Irvine side, Beason stepped up and converted a second half penalty that proved to be the winning goal in a 2-0 victory in Palo Alto.

M Sebastian Schacht, St. Mary's (CA) – As the WCC champions continue to show that this season was no fluke, Schacht remains a pivotal figure for the team. The freshman from New Zealand assisted on the lone goal in a 1-0 victory against Oregon State.

M Kalil Elmedkhar, Kentucky – It was a barn-storming performance from the Wildcats, led by ElMedkhar’s first half goal against the Pilots. He also scored in the second half, pushing him to 10 goals and 11 assists on the season.

M Austin Dewing, Air Force – With an assist in Thursday’s first round matchup and the game winner from the spot, Air Force progressed to the next round thanks to a 2-1 win against Denver on Sunday.

F Nathaniel Crofts, Virginia – Scoring goals has been a challenge at times for the Cavaliers this season. And after almost 78 minutes, deadlock at 0-0 against Furman, Virginia might’ve been sweating a bit. Crofts ensured that there would be no overtimes, scoring twice in the span of seven minutes to put the game away.

F Aaron Ward-Baptiste, James Madison – Ward-Baptiste picked the perfect time to score in back-to-back games. Prior to Thursday’s win at High Point, he hadn’t scored in eight start. Now, he has two in two games as the Dukes prepare for a trip to Virginia Tech.

F Trevor Swartz, Indiana – The redshirt senior’s shown a knack for setting up goals, whether from the run-of-play or his left-footed delivery from set pieces. He setup two on Sunday against Connecticut with his delivery from corners and put it on a platter for Spencer Glass as the Hoosiers cruised to a 4-0 win.