Men’s Team of the Week: November 27 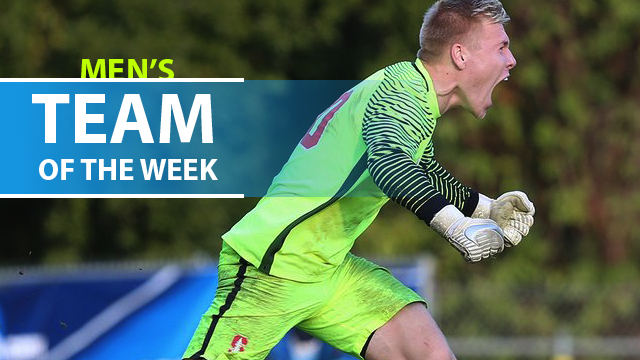 The latest victim to fall to the Cardinal was St. Mary’s (CA)(m). Stanford survived despite getting outshot by a 21-8 margin on the road, and with the game tied at 0-0, penalty kicks were needed.

Cue the heroics of the latest Player of the Week, Stanford goalkeeper Andrew Thomas. The native of England’s been one of the best shot-stoppers this year as a redshirt freshman, and he continued to show why during the Gaels.

After making 11 saves in 110 minutes of action, Thomas set the tone in the penalty shootout, making a tremendous lunging stop to give Stanford the advantage after the first round. When the Cardinal stepped up and converted all four spot kicks necessary, they sent the WCC champions home and stayed on course for a fourth straight national title.

See some of the other top third round performances below.

GK Andrew Thomas, Stanford – The First Team all-Pac-12 performer set a new career high with 11 saves, four more than he made earlier in the regular season against Georgetown.

D Donovan Pines, Maryland – For a program that likes to get forward, a resolute back line has anchored Maryland’s return to the quarterfinals. Pines steered his team’s defensive effort, helping the Terps keep another clean sheet in a 2-0 victory against Duke.

D Jack Maher, Indiana – An imperious freshman season continued for Maher, who back-stopped a dominant 2-0 win against Air Force in Sunday’s third round. Whenever Air Force managed to get the ball into relatively dangerous spots, Maher was there to either intervene with a clearance or blocked shot.

D John Frietag, Michigan State – Normally deployed at right back, Frietag swapped to the left side for the second half. Either way, he put in an impressive shift as the Spartans secured a 1-0 victory at Georgetown.

D Timmy Mehl, Indiana – Like Maher, Mehl kept the Air Force attack at bay. The center back also scored the game’s second goal and notched an assist on the game winner.

M Tommy McCabe, Notre Dame – A pinpoint ball into the box from McCabe was headed home by Jack Lynn, securing Notre Dame’s spot in the Elite Eight with a 1-0 victory against Virginia.

M Bailey Rouse, Kentucky – In a game where Kalil Elmedkhar and JJ Williams failed to find the back of the net, it was Rouse that popped up to score the game-winning goal in a 2-1 win against Lipscomb on Friday night.

M Amar Sejdic, Maryland – The senior went the full 90 in the Terps midfield, closing down passing lanes and looking to keep the Blue Devils at bay after Maryland’s first goal. He scored the team’s second goal as well, capitalizing on a midfield giveaway to put them up by two goals.

M Yannick Franz, James Madison – A graduate student from Germany, Franz punctuated JMU’s 3-0 win at Virginia Tech with a well-taken free kick. It was his first goal of the season.

M Michael Pimlott, Michigan State – While credited with an assist, Pimlott simply recycled possession to Michael Miller, who blasted home the winner in a 1-0 victory. The Michigan native was outstanding along with that, locking down the central midfield and preventing the Hoyas from getting the equalizer.

F Marcel Zajac, Akron – Another huge goal for Zajac came in Akron’s 1-0 road win against Wake Forest, sending the top seed at home and advancing to a rematch of last fall’s College Cup against Stanford.