Men’s Team of the Week: November 3 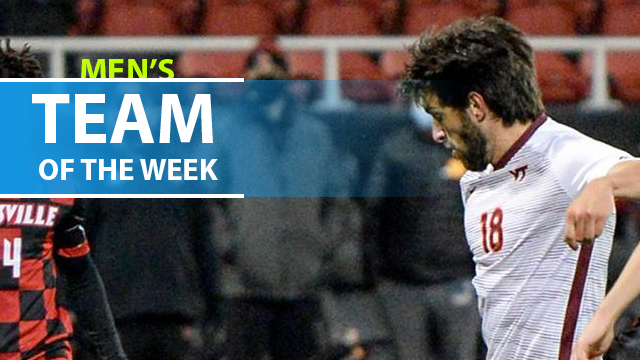 It took four tries, but Virginia Tech finally picked up its first win of 2020.

The Hokies traveled to Louisville and outgunned the Cardinals, outshooting the hosts by a 26-5 mark. Rising to the occasion is the latest Player of the Week, as senior forward Jacob Labovitz fired both goals to lead the way.

It was so good we had to give you multiple angles 🤷‍♂️#Hokies 🦃⚽️ pic.twitter.com/991UgpUVlv

Check out some of the other top performances from the past week of action in men’s Division I soccer below.

GK Alex Rando, Virginia: A second start for Rando and his first win and shutout in Friday’s 1-0 win against Syracuse. Rando made four saves in the win.

D Alberto Suarez, Central Arkansas: The junior from Spain back-stopped a crucial 1-0 win against Georgia Southern, grabbing the game-winning goal in the process.

D Matthew Constant, North Carolina: While the defending wasn’t the strong suit in last Tuesday’s 3-3 draw against Clemson, Constant did get an assist on the tying goal. He also helped keep a zero in Sunday’s 0-0 draw against NC State on Sunday.

D Andreas Ueland, Virginia: The sophomore helped his side keep a clean sheet in a 1-0 win against Syracuse, and also scored the winner from the penalty spot.

D Kendall Edwards, NC State: Starting his first game of the season, Edwards helped to keep UNC off the score sheet, playing 110 minutes in a 0-0 draw.

D Nico Benalcazar, Wake Forest: Along with keeping the shutout against Clemson on Friday, Benalcazar bombed forward and finished off a break as the Demon Deacons beat

M Daniel Pereira, Virginia Tech: The standout sophomore had a good game despite not coming up with a goal to show for it. Along with pumping five shots on frame, he completed 86% of his passes and was extremely influential.

F Kimarni Smith, Clemson: After Tuesday’s 3-3 draw against North Carolina, Smith and the Tiger attack were unable to find the back of the net in a 2-0 loss to Clemson. Smith was able to claim a brace against the Tar Heels, however.

F Jacob Labovitz, Virginia Tech: Two goals from the senior, including one in overtime, led the Hokies to a 2-1 win against Louisville on Friday.

F Machop Chol, Wake Forest: The dynamic forward put the game out of reach by assisting on Wake’s second goal of the game, as he setup Calvin Harris in the 2-0 win.