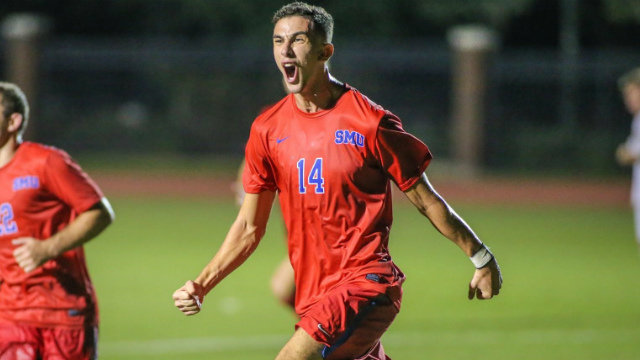 After a down season by his own lofty standards, SMU’s Mauro Cichero is finishing his collegiate career with a bang.

The Oklahoma native’s strong season continued last week, as he scored three goals and added two assists in a 6-0 win over Northeastern and a 1-0 defeat against Memphis.

There were several other standouts over the past week of the Division I men’s soccer season.

GK Scott Levene, Connecticut – It was a memorable shift for Levene, who made four saves and had an all-around solid performance in UConn’s 2-0 win on the road against South Florida.

D Tom Judge, James Madison – The freshman defender played the full 90 minutes in wins against Delaware and UNC Wilmington. He setup one of the goals in the win over Delaware.

D Mauriq Hill, Pittsburgh – In Pitt’s historic win against Notre Dame, Hill anchored a back line that kept Jon Gallagher and the Notre Dame attack off the score sheet.

D Callum Montgomery, Charlotte – Montgomery anchored a 49ers defense which only allowed one goal in nearly 200 minutes of action. He helped the 49ers to victories over Radford and Florida Atlantic, including a 1-0 shutout in win overtime against Radford.

M Skye Harter, Akron – The sophomore served as playmaker for the Zips over the past week. He scored a goal in a 2-0 win over Cleveland State, and setup all three goals in Akron’s 3-1 win over SIUE.

M Diego Campos, Clemson – It was a potent week for Clemson’s attack, which amassed nine goals across its two wins. That included a hat trick for Campos, as the Tigers cruised past Duke on Friday night by a 4-1 score.

M Kosti Moni, Western Michigan – The midfielder provided the game-winning goal for the Broncos in their massive 5-0 win against Northern Illinois.

F Mauro Cichero, SMU – After another big week, Cichero now has nine goals and six assists for the 2017 season.

F Ricky Lopez-Espin, Creighton – Like Cichero, Lopez-Espin is a senior saving his best for last. The forward found the back of the net twice in Creighton’s 4-1 win over Xavier, and also scored the winner in a 6-1 defeat of Drake last Tuesday.