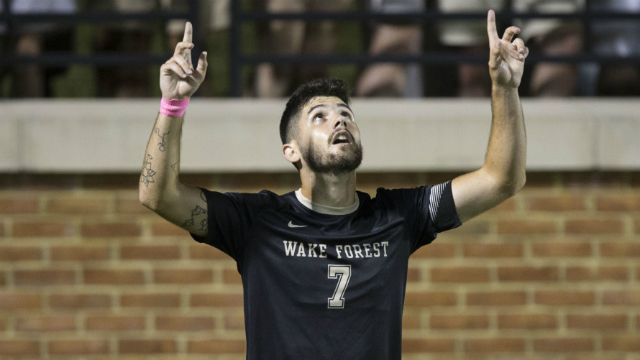 In a clash between two top sides, it was one of the nation’s best players that stepped up to deliver the win.

Wake Forest forward Jon Bakero’s speared finish in the 66th minute was the difference in the top of the rankings clash against North Carolina on Friday night.

Bakero earns TopDrawerSoccer.com Player of the Week thanks to his goal-scoring heroics, as the two national title contenders seemed destined to meet again later in the season.

There were several other impressive individual efforts that caught the eye over the past week of Men’s DI soccer.

GK Elijah Michaels, Western Michigan – In his first career complete game in goal, Michaels made five saves in Saturday’s 1-0 win at home against Akron. The victory was WMU’s first against the Zips since 2014.

D Matthew Powell, UCLA – Desperately in need of wins in Pac-12 play, Powell and UCLA stepped up in a big way over the past week. Heading on a Pacific Northwest road trip, Powell played the full 90 in a 1-0 win over Oregon State, and then nabbed the winning goal on Sunday night against Washington.

D Markus Fjørtoft, Duke – The central defender played the full 90 minutes as Duke beat Elon at home and picked up an impressive road win against Pitt on Friday by a 2-0 score. The Blue Devil back line kept a clean sheet in both victories.

M Rey Ortiz, Portland – It's been a quality season for Ortiz so far, and that continued, as he shined in Portland's WCC opener. He setup the opening goal and then tallied one of his own from an extraordinary free kick as the Pilots topped Pacific 3-1. Ortiz provided an assist last Monday in a 2-1 loss on the road against Virginia.

M David Lozano, UNC Wilmington – UNCW’s impressive 2017 continued last week, with Lozano at the heart of it. He scored three games in two wins, including a brace in a 3-0 defeat of Drexel on Saturday.

M Steven Dal Molin, VCU – As VCU continues to build momentum this season, Dal Molin continues to emerge as a big piece of the latest success. He played the full 90 in wins against Davidson and Fordham. The latter was a huge win on the road in Atlantic 10 play.

M Cameron Lindley, North Carolina – Despite finishing on the losing end against Wake Forest, Lindley was still in scintillating form over the week. He scored twice and setup another goal in a Tuesday victory against James Madison, and scored from a free kick in the 2-1 loss to Wake Forest.

F Declan McCabe, Georgetown – The combination of McCabe and Ifunanyachi Achara provided the swift start the Hoyas needed against Butler. McCabe had a hand in all three goals, scoring and assisting on two others as Georgetown continued its impressive play with a 3-0 win at home.

F Santiago Patino, Florida International – Patino extended his goal-scoring streak to six games, finding the back of the net three times in a lopsided 4-0 win against Marshall.

F Max Wilschrey, Old Dominion – It was a big win for ODU on the road, overturning a 1-0 deficit to defeat Charlotte by a 2-1 score. Wilschrey scored the winning goal from a penalty kick with 10 minutes left in the game.