Men's Team of the Week: October 9 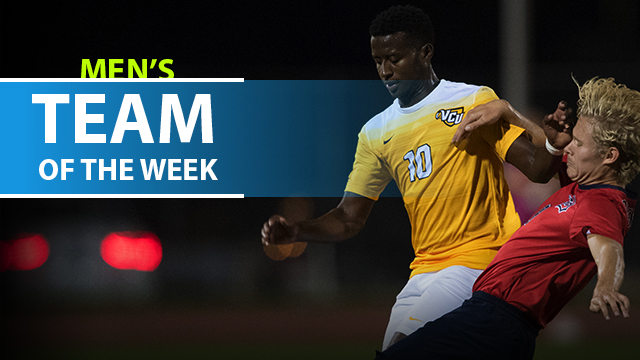 Few underclassmen have boosted their professional stock this season quite like Siad Haji.

The dynamic attacking midfielder was perhaps a bit slow out of the gate, but continued to trend up over the past week, leading VCU to a pair of significant conference wins at home.

In a mid-week clash with the 2017 A10 champions Massachusetts, Haji fired home a pair of goals. During Saturday’s encore, Haji was credited with the assist on both goals, as the Rams extended their conference winning streak to three games.

Haji’s output over the week nets him the latest Player of the Week, and pro scouts are sure to take notice as he continues to influence games on the score sheet. See which other top performers from around the nation join him below.

GK Michael Creek, Missouri State – One of four remaining unbeaten teams in the country, Creek kept a pair of clean sheets over the past week in 1-0 wins. He made a single save in a win over Western Illionis, and then came through with five big stops in a conference victory against Bradley.

D Scott Devoss, Denver – Plenty of digital ink has already been spilled about Andre Shinyashiki’s performance of 2018. But the Denver back line has also excelled for long parts of the season. DeVoss logged every minute over the past week, including 105 minutes in a 1-0 win in double overtime against Creighton.

D AJ Vasquez, UCLA – Making his return from injury, Vasquez played the full 90 minutes and helped UCLA keep a pair of clean sheets over the past week. The former U.S. youth international back-stopped 1-0 wins over Oregon State and Washington as the Bruins extended their Pac-12 record to 3-1.

D Patrick Nielsen, Michigan State – After losing its first game of the season the weekend prior, the Spartans hit the road to College Park and plundered all three points. A big part of that was thanks to Nielsen, who scored the winning goal from a set piece (or at least he claimed to score it) and led the team’s defensive effort in a 2-0 victory.

M Siad Haji, VCU – With two goals and two assists, Haji boosted his numbers to five goals and seven assists on the season. He's arguably the top pro prospect in the men's college game this season.

M Niko Klosterhalfen, Old Dominion – Klosterhalfen found the back of the net three times in two victories for the Monarchs, scoring the winning goal in overtime (one of two tallies) against William & Mary. He opened the scoring on Saturday, a 4-1 win against Florida Atlantic.

M Alvaro Quezada, UC Irvine – A roaring start to the Big West campaign saw Quezada at the heart of UC Irvine’s success. He had two assists in a 3-1 win against UC Riverside, added a goal and assist in a defeat of Sacramento State.

M Jonathan Hagman, Syracuse – Riding a three-game winless streak into a week that featured matchups against Akron and Wake Forest, the Orangemen jolted their season to life with a pair of wins. Hagman scored a hat trick against the Zips to win it 3-1, and also started and locked down the Demon Deacons on Friday night by a 2-0 score.

F Josh Luchini, Lehigh – The freshman forward had a hand in leading Lehigh to a pair of 1-0 wins in conference play. He setup Mark Forrest’s winner last Wednesday, in a defeat of Colgate. On Saturday, he scored the winning goal in a win against Navy.

F Jake Rudel, St. Mary's CA(m) – Make it 10 goals in 12 games now for Rudel, who scored the opening and close goals in a 4-0 defeat of Pacific over the weekend. The Gaels look here to stay in the WCC race, and now sit at a record of 12-0.