Men's Team of the Week: September 13 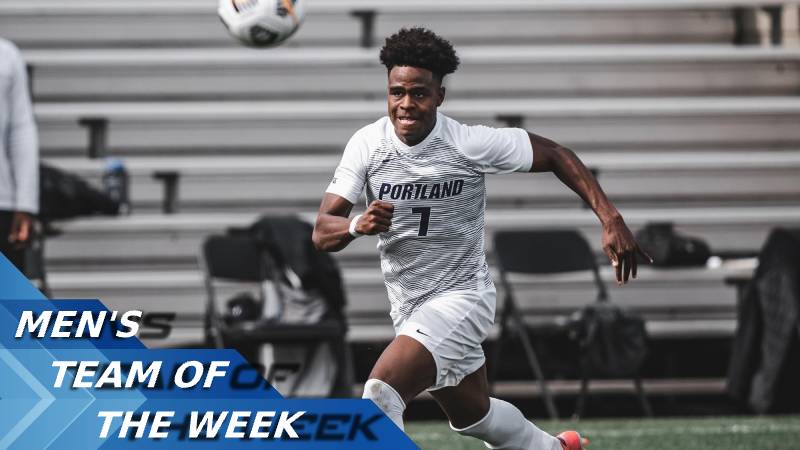 There wasn’t any hesitation to Brandon Cambridge’s shot. He leaned back, wrapped his left foot around the ball, and sent it spinning into the top corner. The celebrations were similarly emphatic, a slide in front of the home fans. It was a goal worthy of completing a 2-0 Portland upset over UCLA, one to cap off an impressive victory.

But that wasn’t Cambridge’s only impressive performance last week. The midfielder also ran the show against Seton Hall five days before, scoring two goals before assisting the third. It was a complete week for an ever-improving midfielder, a player finding form and establishing himself on the national stage.

GK Domenic Nascimben, Duquesne - Nascimben has been in fine form to start the season. The Duquesne keeper has only conceded once all season, while also racking up saves in big performances against Michigan and Howard. He tallied 13 saves across two games last week.

D Nick Atkinson, Army - Atkinson scored the game winner for Army against FAU(m), knocking in a header off a free kick. He was equally impactful at the other end, holding down a defense that kept two clean sheets.

D Elias Katsaros, San Diego State - Katsaros had about as prolific of a week as a defender might enjoy. He scored three goals, including a brace in a 2-1 upset of Denver. All three goals were headers.

M Max Rogers, Yale - Rogers put in the hard yards in midfield for Yale, playing every minute as the Bulldogs enjoyed a two win week. He provided one of the week’s best moments, too, scoring from long range to beat West Virginia.

M Malcolm Johnston, Maryland - Johnston impacted the game in all sorts of ways last week, playing across multiple positions to help the Terrapins to two wins. He scored two goals — both penalties — and also added an assist against Virginia.

M Shakur Mohammed, Duke - Mohamed ran the show for Duke against Louisville, scoring both goals in a 2-1 win over the Blue Devils’ ACC rivals.

F Marco Afonso, UNC Greensboro - Afonso has run the show for undefeated UNCG. The Grand Canyon transfer was particularly impressive against High Point, where he bagged a goal and an assist in an emphatic 5-1 win.

F Eliot Goldthorp, Hofstra - Goldthorp led the way in a bounce-back week for the Pride. He scored twice to help Hofstra past LIU before assisting on the winning goal against Monmouth.

F Alex Meinhard, Tulsa - Meinhard’s emphatic finish from outside the box secured a 1-1 tie against Kentucky. He was a handful for most of proceedings until a red card forced a change in tactics for Tulsa. A goal and assist against Oral Roberts further added to an impressive week.