Men's Team of the Week: September 14 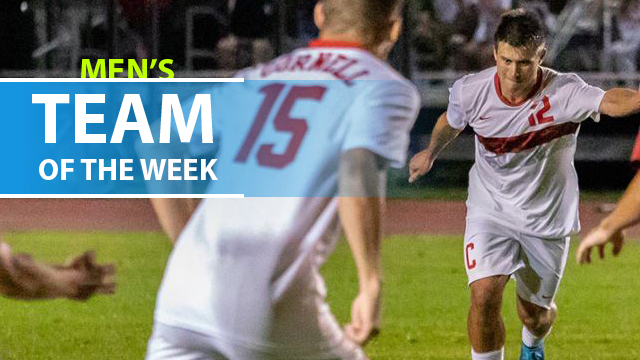 Playing three games over the past week, Cornell started off strong in the fall season.

Fifth-year senior Tyler Bagley was in the midst of it all, earning Player of the Week nod. Bagley scored five goals and had two assists during that stretch. He had two goals each in the wins over High Point and UC Santa Barbara, while chipping in a goal and assist on Friday versus the Hawks.

GK Will Meyer, Akron – Meyer made a string of massive saves against Pitt and Indiana, as the Zips were able to pick up a win and a draw against the Top 10 foes. He was particularly impressive against the Hoosiers, preserving the draw on more than one occasion.

D Esai Easley, Grand Canyon – Two 90-minute shifts at the back helped GCU nab a pair of 1-0 wins, defeating Oregon State and St. Mary’s. He also tallied the game-winning goal against the Gaels as the WAC side kept rolling under new head coach Leonard Griffin.

D Kevin Bonilla, Portland – Two games, two 1-0 wins for the Pilots. That includes a trip south to UCLA, where the Pilots secured a victory against the Bruins. Bonilla scored the lone goal of the game from his right back spot.

D Thomas DeVizio, Rutgers – The senior defender had three assists last week for the Scarlet Knights, as they picked up a pair of wins. He setup a goal in a 2-0 defeat of Mount St. Mary’s, then added two more helpers in a 3-2 victory over Lehigh.

M Isaiah Parker, Saint Louis – An electric flank player, Parker scored in SLU’s 3-0 win over Memphis last Monday. He was also a handful to contain as a wingback in Friday’s 1-1 draw with SMU.

M Sean Zawadzki, Georgetown – The ability to control the midfield with Zawadzki and Dante Polvara is a big reason for Georgetown’s early success so far. The former setup the winning goal last Monday against Santa Clara, and helped the Hoyas win the midfield battle to edge Maryland by a 1-0 score on Saturday.

M Celio Pompeu, VCU – Pompeu bagged a goal as VCU picked up an impressive 2-0 road win against Charlotte. It was the Brazilian native's first goal of the season.

F Malik Henry-Scott, Tulsa – Winners of all five games so far this season, Henry-Scott helped power Tulsa’s attack to two more wins. He scored goal in each game, including a big 1-0 upset win over Marquette, before adding another plus an assist in a comfortable 5-1 victory versus Michigan State.

F DeAndre Kerr, Syracuse – It was a sensational week for Kerr, who scored three goals and had an assist in two games. That included a brace on the road at Charlottesville, where the Orange came away with a big 3-1 victory.