Men's Team of the Week: September 18 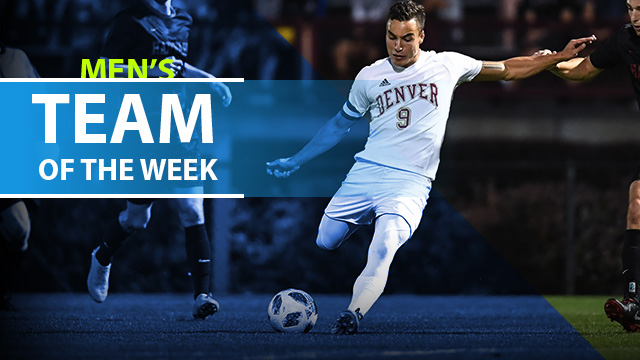 There were a handful of contenders for the latest Men’s Division I Player of the Week award.

But ultimately, the nation’s leading goal scorer emerged as the best option, as Denver’s Andre Shinyashiki scored his third hat trick of the season on Sunday.

Sunday’s three-goal effort capped a sensational weekend for the Montverde Academy product. He put three past San Francisco to wrap up the weekend, piggy-backing off a two-goal, one assist performance in Friday’s 3-1 win over Harvard.

So far this season, the Brazilian’s numbers are absurd; he sits on 13 goals from seven games, scoring in six of those games. He’s already eclipsed his previous season-high in goals, which he set in 2016 and matched in 2017 (nine goals).

See which other standout performances caught the eye over the past week of action in men’s DI soccer.

GK Zachary Nelson, Xavier – After shutting out Kentucky mid-week with six saves, Nelson made seven stops in a 3-2 win on the road against Georgetown in the Big East opener.

D Manny Cerritos, UIC – Led a strong defensive effort at the back for UIC, which conceded just nine shots, including four on goal, in two shutout wins over DePaul and IUPUI.

D Ben Thornton, Western Michigan – The senior defender helped Western Michigan to wins over Cincinnati and UMBC last week. Thornton scored off a corner kick, the game-winning tally in a 2-1 defeat of Cincinnati. He was then part of the defensive effort that allowed just one shot on goal, securing a shutout in a 2-0 victory over UMBC.

M Giuseppe Barone, Michigan State – Across two games over the past week, Barone scored twice and had two assists as the Spartans defeated Oakland 4-2, and drew Yale 2-2 in Connecticut.

F Andre Shinyashiki, Denver – His season may be only seven games old, but Shinyashiki is already the front-runner for Men’s Player of the Year honors and is a big reason why the Pioneers look like a College Cup side this season.

F Javier Carbonell, Georgia Southern – Prior to Shinyashiki’s heroics on Sunday, Carbonell had built a strong case for Player of the Week on his own, bagging four goals in Saturday’s win against Jacksonville. He’s currently the Sun Belt’s leading scorer with eight goals.

F Cal Jennings, UCF – A total of five goals and an assist in two days is a good week, and it helped UCF pick up a pair of wins against Florida International and Stetson. Jennings scored twice and added an assist in the former, and then bagged a hat trick versus the latter.