Men's Team of the Week: September 20 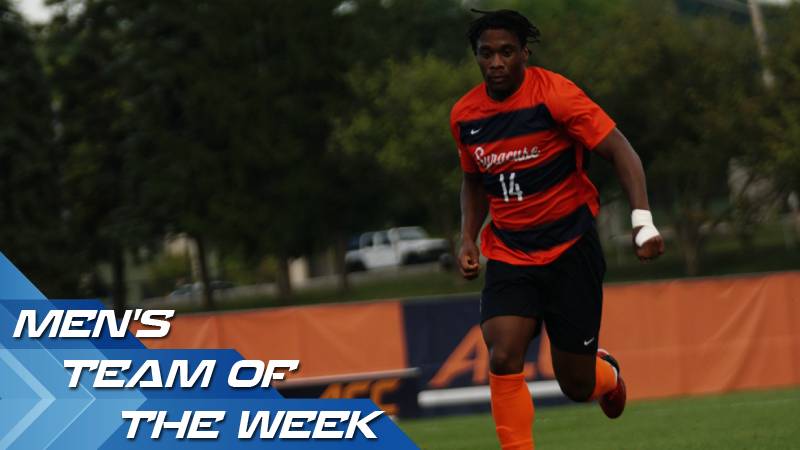 It was the first touch — not the shot — that sealed the goal for Levante Johnson. The Syracuse forward flicked the ball to his right, evading the defender, putting himself in an ideal scoring position, 4 yards from goal. The finish was something of a formality, fired beyond the Clemson goalkeeper. Its importance, though, was immense. The goal gave Syracuse a 2-1 lead over the nation’s top ranked side, an advantage it would hold for the remainder of the game. There hasn’t been a more important goal this season.

Check out the full contingent of top men's DI college performances from the past week.

D Nathan Simeon, San Francisco - The Dons won twice last week by a combined score of 9-0. Simeon assisted on four of those. He now leads the nation with eight assists.

D Brandon Knapp, St. John's - The defender tallied a goal and an assist as St. John’s beat a ranked Georgetown side at home. His was a performance fitting of a major upset win.

D Kasper Lehm, Elon - The outside back tallied three assists last week, highlighted by a couple of helpers in a 2-0 win over Furman. He also played a major part for a defense that hasn’t conceded in 311 minutes of play.

D Hugo Le Guennec, Rutgers - It was a good week for Rutgers, as the Scarlet Knights won both of their games. Le Guennec starred in the second, notching a goal and an assist while playing all 90 minutes of Rutgers’ Big Ten opening win over Northwestern.

M Cameron Wheeler, Xavier - Wheeler led the way for Xavier in a game against a tricky Seton Hall side Saturday night. He opened the scoring in the 37th minute before providing the assist for the Musketeers’ second.

M Xavier Green, Ohio State - Ohio State has been one of the surprise performers of the season so far, and green has played a major part. He completed a slick move for the Buckeyes’ game winner against Indiana, and added another one the game before.

M KK Baffour, Notre Dame – Baffour added a spark to an otherwise dour contest between Notre Dame and Virginia, winning the game with a neat finish as time expired. His dramatic score was one of the season’s best goals so far.

F Stephen Afrifa, FIU(m) - Afrifa keeps scoring. The FIU forward bagged a brace in his team’s 3-0 upset against Tulsa — an emphatic way to mark the Panthers’ first game in the American Conference.

F Jack Sarkos, Lehigh - The forward lifted the Mountain Hawks to their first win of the season, bagging a hat-trick in a 4-0 win. His third was a particularly impressive, a driven shot into the top right corner with his weak foot.

F Levonte Johnson, Syracuse - Johnson’s weaving run and finish capped off a narrow 2-1 win for Syracuse over top-ranked Clemson. His form has been vital in a successful campaign.