Men's Team of the Week: Smith the star 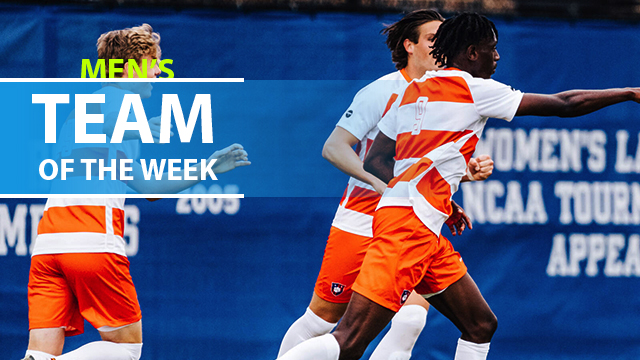 One more week is left in the men’s Division I fall season, as the Sun Belt Conference tournament wrapped on Sunday, and the ACC knockout tournament hits the final stretch.

The Clemson men’s soccer program will like its chances of coming away as winners in the ACC tournament, especially after a ruthless display on Sunday in the quarterfinals.

With all games taking place in North Carolina, the latest TDS Player of the Week Kimarni Smith scored a hat trick, keying a comfortable 4-1 win against Virginia Tech down in Durham. All three goals came in the first half, putting the game well out of reach. He also assisted on the game’s final goal.

GK Tor Saunders, Coastal Carolina: The goalkeeper earned Most Outstanding Player honors after picking up a shutout on Friday night against Georgia Southern, a 6-0 win. Then, he came up big on Sunday in Coastal’s 0-0 draw and penalty kick triumph.

D Alex Henderson, Georgia State: While the Panthers came up short, Henderson scored the lone goal of the game for his side on Friday in a 1-1 draw. He then played every minute in Sunday’s 0-0 draw against Coastal, giving his team a shot despite going down a man in the 52nd minute.

D Andreas Ueland, Virginia: The most notable result of the ACC quarterfinals was Virginia defeating Wake Forest by a 2-0 score in Winston Salem. Ueland anchored his team’s shutout performance against a Wake team that was missing several key players.

D Marcelo Lage, Coastal Carolina: The left back scored two goals in Friday’s semifinal victory against Georgia Southern, which the Chanticleers won 6-0. He then chipped in for a shutout in a 0-0 game that his side won on penalties.

M Jackson Walti, Pittsburgh: Facing a tough challenge from a talented and young Duke side, Walti’s industrious efforts helped to limit Duke’s forays forward. Walti got a goal of his own, beating the offside trap and opening the scoring in the first half.

M Aidan McFadden, Notre Dame: Another big goal from the senior, as he slotted home a free kick through traffic to punch ND’s trip to the ACC semifinals.

M Valentin Noel, Pittsburgh: Another big goal from Noel, who scored the winning goal in Pitt’s 2-1 win over Duke in Raleigh. Noel got on the end of a great cross from Alexander Dexter to help his side advance. Noel also notched an assist on Walti’s goal.

F Grayson Barber, Clemson: It may have been Smith’s day, but Barber’s two assists were also key as he put forth results despite limited minutes.

F Esteban Leiva, Costal Carolina(m): Coming in off the bench, Leiva scored two late goals in Friday’s 6-0 rout of Georgia Southern, while also assisting on another.