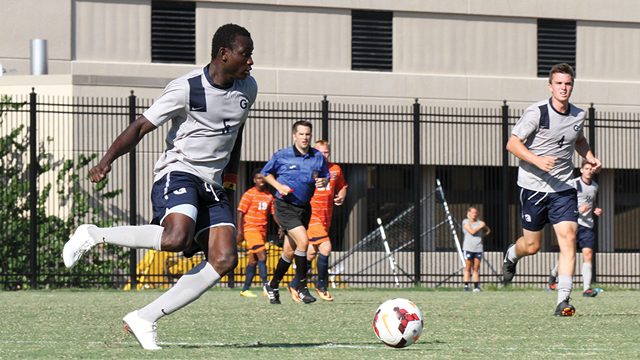 Rolling right into conference play this weekend for men’s Division I soccer. There are a number of quality games on the docket including a must-win contest for one ACC team.

The best matchup of the weekend comes from the Big East where Georgetown hosts Marquette on Saturday. The Hoyas are riding a four-game winning streak into the contest after a meaningful 1-0 win over Maryland on Tuesday. The shutout victory over the Terps extended the Hoyas’ streak to three games without conceding a goal. Marquette, meanwhile, is riding a six-game winning streak and has not conceded a goal in its last 598 minutes of play. These are two teams with somewhat similar approaches to how they want the game to be played. Both depend on having the ball and finding inefficiencies in the opposition to succeed in tight contests. The difference comes from the pace of the attack. Georgetown is a hair quicker in its buildup and Marquette is more deliberate about its actions. Marquette has a massive advantage in set pieces, which could be the difference on Saturday.

There are a lot of layers to this game, but the main story here is Jordan Morris. The prized jewel of the Seattle Sounders Academy returns home for, perhaps, his last trip to the Pacific Northwest as a collegiate athlete. Morris’ season has not been what many would have suspected after training with the U.S. Men’s National Team over the summer and then earning a call-up to the full team for a friendly against Czech Republic in September. Morris’ two goals and four assists are almost a disappointment considering his pedigree. It stems from his finishing as it has been a bit sloppy this season. There’s still a high possibility that Morris sharpens up that area and then makes college soccer an inadequate playground and it very well could be on Sunday with his homecoming. However, Washington is far from a pushover. And the Huskies boost a pretty impressive forward in their own right in Darwin Jones, another Sounders Academy alum, who had a goal and two assists last season against the Cardinal.

Hi, trap game. UNC Wilmington is riding high after a 4-3 upset win over North Carolina on Tuesday. It was a massive victory for the program. Now, Delaware and Guillermo Delgado stroll into town following that emotional win. “Delaware is this weekend; they’re an excellent side,” UNC Wilmington head coach Aidan Heaney told uncwsports.com after Tuesday’s win. “As I said the players, we aren’t just looking at the ranked teams. Every team is going to be a very difficult game.” UMBC put down the blueprint on how you slow down the Delaware attack as the Blue Hens only managed one shot on goal during that game.

It’s weird to think of a game in October as must win, but that is the direction that things are headed for the Tar Heels. North Carolina has lost three in a row including two conference games and host a very talented Clemson side on Friday. In each of those three games, North Carolina has conceded at least one goal after the 70th minute. The frequent errors late in games are a major thorn in the side for the success of the Tar Heels. Dropping to 1-3 in conference play would be enough to hit the alarms, which turns this into a must-win game. Clemson has found success against teams that let them play, but struggled against defenses that are good at trapping and physical. North Carolina leans toward the latter, but there are areas for Clemson to exploit in this Tar Heels system.

There is a very small list of people that truly appreciate this game, so let them enjoy this moment. San Jose State head coach Simon Tobin is one of the best in the business and the thread that connects these programs. He steered the ship for Bakersfield for a long time before making the move to the coast this offseason. His debut campaign has been rocky. His previous program has not hit such speed bumps. Despite an overhaul to the coaching staff and the loss of two of the best players on the roster (Mario Ortiz and Eduardo Calzada), Bakersfield is enjoying one of its best seasons in program history. New head coach Richie Grant is doing a magnificent job. Bakersfield is fun to watch. San Jose State is a project and one that Tobin will turn around in the years to come.