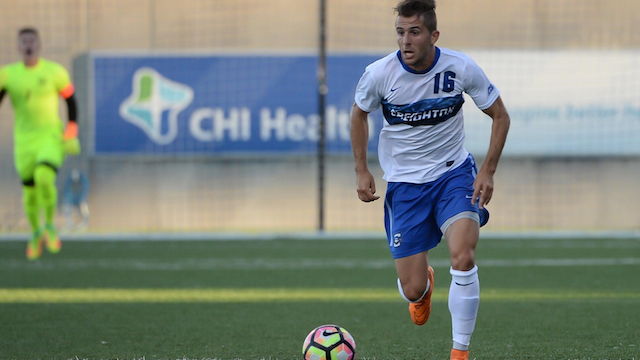 It is another busy weekend in the Men’s Division I Soccer season with most of the top teams in action. No. 1 North Carolina hosts in-state rival NC State on Friday as part of its non-conference schedule. No. 2 Maryland hosts local rival Georgetown on Friday as those programs renew that rivalry.

Neither of those match ups were good enough to crack the top five for this weekend though, as the schedule is kind to fans looking for a game to catch on the holiday weekend. TopDrawerSoccer breaks down the best games to watch below.

Creighton hits the road for the clash against Clemson on Friday. The Jays defeated Rutgers 2-0 on the road in the opener last week and now face a bigger challenge in South Carolina. The Tigers picked up 2-1 wins over South Carolina and Providence to start the season. Forward Diego Campos was on point in the second game as he scored twice to lead the way for Clemson in the win over the Friars. Creighton only returned five starters from last year’s team, which makes these road contests extremely valuable for preparing the group for the postseason. If the Jays can secure a result against Clemson, Elmar Bolowich’s group will be looking like a top five program at this early stage in the season. The Big East team will need to control the center of the field in order to shut down the Clemson style of play. Look for Ricardo Perez to have a big game against Clemson.

Kentucky is in the midst of a three-game home stand as the Wildcats defeated Duquesne 1-0 on Tuesday in the first home game of the season. The Wildcats dominated that game but only managed to put one goal away. Dartmouth comes to town on Friday for the season opener for the Ivy League program. The Big Green squad has a lot of talent and the veteran experience to challenge some top programs in the postseason. Starting a week behind everyone else will work against Dartmouth in this one, as Kentucky will jump out to the fast start, but Matt Danilack and Wyatt Omsburg should help the Ivy League program weather the early storm and keep this close.

The Cardinal dominated opponents in the preseason, but settled for a pair of draws last weekend to get the season started. The choppy start for the defending champions puts some added pressure on this weekend’s games. Stanford needs to pull a win out against Notre Dame on Friday or Indiana on Sunday. The Cardinal has the defense and goalkeeping to pull off that result in the Hoosier State at the adidas/IU Credit Union Classic, but the squad will look different this weekend after star center back Tomas Hilliard-Arce picked up a red card last week in the 2-2 draw against Saint Mary’s. The Cardinal need to replace him at the center of the defense against a red-hot Notre Dame side, which has scored five goals so far this season. Junior striker Jon Gallagher is the key part of the attack. He will be a handful for the Stanford defense. Notre Dame’s defense, on the other hand, has yet to concede a goal this season. Goalkeeper Chris Hubbard and center back Brandon Aubrey lead the defense for the Irish.

The Gauchos have their home-opener this weekend, but the classes aren’t in yet, which means there will not be a huge crowd on hand. That said, the Gauchos have been dominant against San Diego in recent years to the point that San Diego hasn’t defeated UCSB since 1996. The Gauchos looked really good during the opening weekend with wins over Oakland and Ohio St. The score was close in both games, but the Gauchos dominated the play in both. Freshman goalkeeper Titouan Le Roux looks like a good pick-up. Freshman midfielder Daniel Amo is one to watch as well. He keeps things moving in the build-up, and has the tools to play at the next level.

UCLA played terribly last week against Cal State Fullerton, but came out with the win. There is a blueprint for how to take the game to the Bruins, but it is very different from how Akron typically plays. There is buzz that Abu Danladi will return to the Bruins lineup this weekend after missing the opening weekend due to injury. The Zips picked up wins over Georgetown and Seattle to open up the season. Seattle took the game to the Zips during stretches of the match, but the Zips defense held strong and goalkeeper Ben Lundt was terrific. He will need to be great again this week with games against San Diego State and UCLA on the schedule.