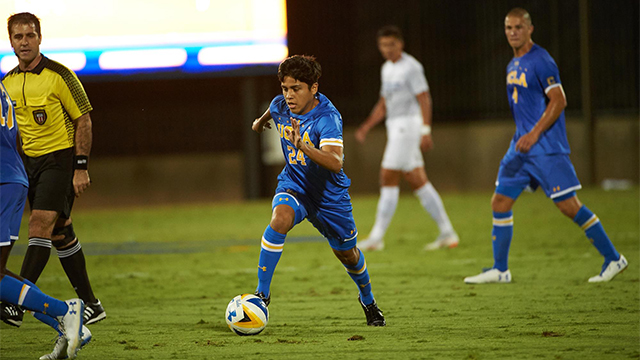 Check out the five top matches this weekend in men’s Division I soccer (all kickoff times listed EST).

At this point in the ACC season, there is plenty to play for as the conference reinforces its status as one of the premier leagues in men’s DI soccer. The Wolfpack have lost twice through its first three games in league play, and with Louisville coming to town, will hope to shore up their RPI with a win. Like other teams in North Carolina, NC State’s battled through some scheduling hurdles due to Hurricane Florence and its aftermath. Shutting down Louisville in the final third is critical for the hosts, while getting the offense clicking through Gabriel Machado and Manny Perez driving factors. For Louisville, Tate Schmitt scored his first goal of the season in a Tuesday night win at Georgetown, and if the senior gets hot, the Cardinals have to like their chances of a deep tournament run.

One of the breakout teams of the current season, NIU has already well-exceeded last fall’s win total of three. Timely goals have been a big part of the team’s record to this point, with Jan Maertins and Anthony Markanich each snagging two game winners apiece. A trip to the Pacific Northwest for a Friday night clash against the Pilots is a massive test of NIU’s staying power. Benji Michel’s profile and potential pro prospects are growing leading the line for Portland. He has eight goals in nine games, including five winners – it’s difficult to understate his importance to the team. Senior Kienan Weekes' contributions between the posts, in his first season as a starter, have also been important.

After dropping its first American Athletic game last weekend to Temple, UCF returns to home cooking to welcome another conference contender to town. Cal Jennings has emerged as the crucial figure for UCF in the final third, scoring nine of the team’s 16 goals. Flying from Dallas to Florida, SMU won its league opener, and counts on a collaborative effort in terms of its goals. Midfielder Emil Cuello has been one of the main outlets of creative, while Garrett McLaughlin has yet to hit the same heights of his sophomore season.

Another Carolina clash sees the Blue Devils make the two-hour trip to Winston Salem as they look to slow down the Demon Deacons. While Duke’s fortunes have slightly dipped of late – injuries have certainly factored into that – they still have the pieces to trouble Wake Forest. Issa Rayyan’s ability on the wing can break down any opposing defender, and if he can have joy down the flanks it can boost Duke’s chances of springing the upset. What stands out about Wake Forest at this point is their strength in depth. Bruno Lapa’s emerged as a key goal threat, but he’s just one of 5-6 players that can threaten in front of goal. Omir Fernandez continues to develop and improve as a sophomore; in total nine different players have contributed to the team’s 28 goals through the first nine games.

Pac-12 play finally begins this weekend, as the men’s conference heads into action. Sunday’s UCLA-Stanford matchup may not carry the same kind of luster as it does on the women’s side, but it should be compelling enough. For UCLA(M), the availability of forward Mohamed Kamara and goalkeeper Justin Garces are going to dictate their chances. Hosting the matchup, the Cardinal are still a tough team to beat and score on, even if they aren’t the same force as they have been in year’s past. Amir Bashti’s ability to finish chances in the final third are sure to dictate how far Stanford can go in the Pac-12, starting this weekend.