Mexico U20 Men’s National Team defeated the U.S. 3-1 on Sunday and won the 2013 U20 CONCAFCAF Championship.

The title marks the 13th regional crown for the Mexico U20 side. The U.S. has yet to win the tournament. 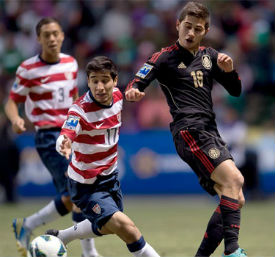 The U.S. came close to making history on a number of occasions, but could not find the go ahead goal on the day. Mexico scored the game-winner in the first extra time period when Jose Gomez’s overhead kick skipped into the net.

El Tri added another in the second extra time period on a penalty kick with eight minutes left in the game.

Benji Joya scored the lone goal for the U.S. on a penalty kick in the first half.

Both teams had already clinched a spot at the 2013 U20 World Cup thanks to advancing to the semifinal stage of the tournament. The draw for the World Cup will be held on March 25.

GK Cody Cropper, 7. Cropper made three fine saves on the day that showcased his quality as the top keeper in this cycle. There was not much Cropper could do on any of the three goals that the U.S. conceded on the day.

D Dillon Serna, 5. Not the best outing of the tournament from the Colorado Rapids Academy product. He struggled to connect out of the back, but did put in a good shift defensively against the dangerous wingers from Mexico.

D Shane O’Neill, 6. O’Neill’s gamble on the Mexico’s first goal exposed his inexperience at the position. O’Neill did settle down after the mistake and had a solid outing prior to hitting the shower early for a red card in the second extra time period.

D Javan Torre, 6. The UCLA defender acquitted himself well to the game with his ability to win the ball in the air. Torre was substituted in the second period of the extra time as he looked fatigue.

D Juan Pablo Ocegueda, 5. Negatively marked for the penalty kick conceded late in the game, but he really did not have a choice. Ocegueda did well against the constant pressure from the Mexico attack.

M Mikey Lopez, 6. The Sporting Kansas City midfielder disrupted the Mexico fluid style on a number of occasions. He could have helped the attack more, but his instructions likely made him conscious to hold back against the dangerous opposition.

M Wil Trapp, 7. It was the best performance of the tournament from the former Akron standout. He covered a ton of ground in the middle of the field alongside Lopez, which set the tone for the U.S. until fatigue set in during the extra time periods.

F Mario Rodriguez, 7. Similar to Trapp, Rodriguez put in a shift that proved his quality at this level. The forward showed his strength in holding off multiple defenders.

M Benji Joya, 7. Prior to running out of gas late in the second half, Joya had a virtuoso performance that had some already thinking of his future at the full team level. The U.S. was perhaps too direct at times to really show Joya’s skill, but when he had a foot on the ball, he created the best chances of the game.

M Danny Garcia, 6. The North Carolina attacker was a key piece for the success of the game plan on Sunday, as he provided the link between the forward and midfielder line. Garcia was successful in the role, but had a couple of chances that he should have converted to give the U.S. the lead in the first half.

Brandon Allen, 5. The Georgetown striker only had a few minutes to make his impact with the U.S. trailing in the second extra time period. Allen did not get enough service to really show his quality.