Last year Illinois State Redbirds ruled the roost in the Missouri Valley Conference, capturing the league and tournament titles thanks to a dominant, attacking style of soccer.

This year, things will only continue to improve as another season nears kick off.

“I think the overall talent in the Missouri Valley continues to improve,” Illinois State head coach Drew Roff told TopDrawerSoccer.com. “Every game is always a challenge in our league.” 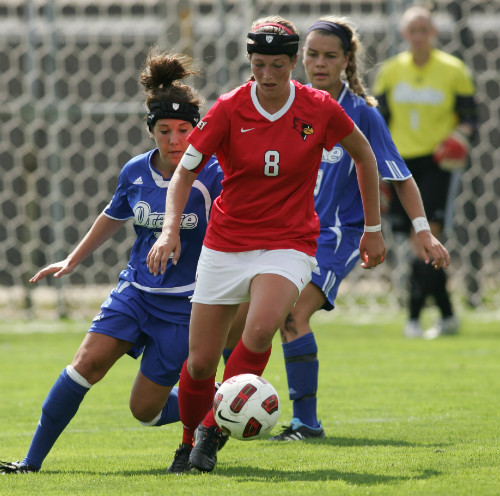 It’s going to take a lot to knock Illinois State off its perch, but by no means is it a one-team conference, and it’s set to be another competitive season this fall.

On the back of its strong offense, scoring an average of 2.95 goals per game, Illinois State bossed the Missouri Valley last year, with the added firepower of freshman Rachel Tejada (21 goals) leading the way.

However, like all programs, there are players who will be difficult to replace, such as Natalie McCabe, last year’s defender of the year. As a result, a lot is expected of Kristin Cooley, a rising senior, who has the experience to help cope with the loss of McCabe’s departure.

Despite the loss of some talent, Illinois State won’t change much.

“We’re not going to change how we play, we want to play an aggressive attacking style, fun to play, fun to watch, but we need to do it in a way we don’t concede a lot of goals,” Roff told TopDrawerSoccer.com.

There’s much more to this Redbird side than Rachel Tejada, of course. Left back Gabbi McArtor plays a big role in attacking down the left flank, while Anna Stinson is expected to help Tejada boss the attack from the midfield.

Last season's success is going to increase the pressue on Illinois State, as the other teams look to wrest the conference crown away.

"I know that teams are really going to bring their best game possible when they play against us next year," Stinson told TopDrawerSoccer.com. "It's going to be a really big challenge for us but it's something we are really excited for and I hope we can step up to it."

The last two years, it’s been the case of close but no cigar for Missouri State, as they’ve lost in the Conference tournament final both times.

Like many programs, staying healthy is key. Rachel Weimer, who started off strong her freshman season three years ago, has seen her last two seasons end thanks to ACL injuries, and keeping her healthy is crucial.

They have a clear objective – grab a spot in the NCAA tournament via the conference tourney – and to do that, peak at the end of the season.

“It does come down to the [MVC] tournament; last year we were not as healthy at the end as the middle,” head coach Rob Brewer told TopDrawerSoccer.com.

In the past, the pieces have been in place for Creighton and head coach Bruce Erickson, but so far they haven’t been able to put it all together.

Last fall was supposed to be the year for Creighton to make a breakthrough, but injuries derailed an experienced group from putting together a season, and the Bluejays bowed out to Illinois State in the conference tournament.

Now, with a core group having moved in, Creighton’s incoming class is going to have to shoulder the brunt of the load this coming year.

“It’s going to be a dramatically different team for us,” Erickson told TopDrawerSoccer.com.

If one of those incoming freshmen comes in and can quickly adapt to the higher demands of college soccer, Erickson is confident that they have the talent to go far and put together a quality season.

Among the newcomers with much to prove are Jill Richgels and Maddie Nelson in defense, and Alissa Kohmetscher in midfield.

Of the returners, Brittany Neumann – who has been near the top of the scoring chart for Creighton over the past two years – is expected to step up after battling through a niggling knee injury in 2011, and if she can, it can boost what will be a younger group.

Looking to build on the eight overall wins a year ago –the best program total since 2003 – Northern Iowa faces a challenging uphill battle to try and compete with the three more favored sides.

Senior midfielder and all Conference last year, Melissa Hagan will be looking to cap off her college career on a high note, and will need all the help she can get from junior defender Sam Copley and sophomore Caitlyn Fuller.

If there’s a team in the conference that could sneak past Creighton, Missouri State or Illinois State, it could be this Northern Iowa side, which shapes up to be something of a sleeper.

Another team in the MVC on the hunt to turn things around, Drake has a number of returnees that should help to keep things on an upward trajectory. Laura Moklestad has been the team’s best offensive player over the past two seasons, while Megan Fisher and Katie Helmlinger should bring solid contributions as well.

The Purple Aces season came to end in emphatic fashion at the hands of Illinois State last fall. It’ll be a fairly experienced team this season, with forward Breana Beine one of several returning players. Also back is senior goalkeeper Chaviel Harrison and midfielder Stephanie Thompson.

Is that going to be enough to compete at the top? That’ll be something the program aims to achieve as they look to hunt down the top trio of teams.

An inability to find the back of the net proved costly last fall for Indiana State, and the upcoming season is a chance to improve on that. Scoring 12 goals in 17 games was one of many reasons Indiana State couldn’t get anything going in conference play.

If anything is to be better, one of the central factors for that will be Natalie Vaught who landed on the All-Freshman team in conference last fall.