There were a number of players who transferred teams during the offseason, but Zach Barnes may have been the most important shift in the college soccer landscape.

In college soccer, there is no penalty for transferring to another school as long as it is outside the previous school’s conference, so there are a number of players who move on for one reason or another.

Barnes’ reason came down to playing style. The former Dallas Texan standout was successful during his time at SMU [37 games played (out of 40), six goals, two assists] but he no longer wanted to be pigeon-holed as a defensive midfielder.

So Barnes asked for his release from the Mustangs and looked at a few programs before selecting Creighton. The midfielder, who sees himself as more of a box-to-box player, heads north to Omaha in hopes of adding that spice to the Bluejays roster to push it back to College Cup.

Although the new addition to the roster is a big boost, the ‘Jays still need to find replacements for goalkeeper Brian Holt, midfielder Greg Jordan, forward Ethan Finlay, and a few others that graduated or left early from last season’s squad.

There are also a few challengers in the Missouri Valley Conference (MVC) looking to knock the ‘Jays off the top spot. Missouri State was the lone MVC program to defeat Creighton in 2011.

Bradley was ranked in the top 25 for a stretch of the 2011 season and ended up as an at-large bid in the NCAA Tournament. The Braves won their first round matchup against Loyola before dropping a very close result double overtime result 2-3 to Louisville in the second round. 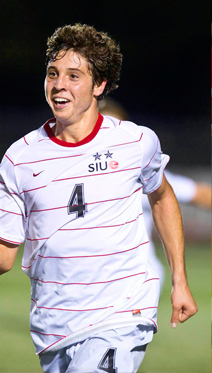 There are midfielders in college soccer and then there is Jose Gomez. Gomez, or ‘Choco’ as he is affectionately known, is simply in a class of his own. His deft ability to control the game has made him the unsung hero in Omaha for the last two years.

In his senior campaign, the Jays will need to lean on Gomez to see them through a brief rebuild from a big turnover of 2011’s roster. Head coach Elmar Bolowich will also be counting on Bruno Castro, Eric Miller, and Andrew Ribeiro to help carry the load while the new players adjust to the system.

With games against Northern Illinois, Akron, and Rutgers to start the season, the Jays need to be sharp from first whistle.

Missouri State announced the final recruit, Jon Boyack, for its 2012 class earlier this month. Beyond adding more depth to the attacking ranks, Boyack is the “fourth Englishman to sign with the Bears this year” according to the school’s release.

The reliance on the English talent should give fans a pretty good idea of the style of play the Bears like to use. It has been effective in the MVC with seven winning seasons in the last eight years. But the wins have not translated to NCAA trips.

The tournament berth in 2009 remains the lone trip for the Bears in the last ten years.

Junior goalkeeper Brian Billings has been one of the main stories of Bradley’s success over the last two years. Starting as a true freshman in 2010, Billings claimed a 1.33 GAA with 88 saves. Last season, he nabbed 93 saves and dropped his GAA to 0.94. In his third year, the expectations grow from the Minnesota-native.

Elsewhere on the field, the Braves face a challenging circumstance in trying to replace Bryan Gaul, who led the team in scoring with 11 goals and four assists.

Head coach Jim DeRose has put the Braves in the NCAA tournament in back-to-back seasons, but that seems like a pretty lofty goal in 2012.

Like most of the programs in the MVC, the Drake Bulldogs are dealing with substantial losses from the 2011 roster heading into the fall. The top three scorers from last year’s squad are gone including Matt Kuhn who was the leader of the team last season.

In response to the turnover, head coach Sean Holmes brought in nine new players to help fill in some roles. Those freshmen may need to step in sooner rather than later.

Ross Duncan is the new man in charge at Central Arkansas this fall. The former associate head coach now has the responsibilities all on his shoulders and this fall will definitely be a challenge.

After only scoring 14 goals in 2011, Duncan will need to put together a new plan for the attack if he hopes to keep the Bears competitive in the MVC, especially considering the conservative nature of most programs in the conference.

Last year’s record and finish in the conference was not indicative of the level of quality on SIU Edwardsville. But this fall will be a different story with many different faces assuming roles in the starting lineup.

Christian Volesky, a transfer from Denver, could be a big piece to the puzzle for the Cougars. Volesky led Denver in scoring during his freshman campaign with six goals in eight starts.

Conference play was brutal to the Purple Aces last year with only one goal and one point secured from the six games. The plus from that unfortunate season is head coach Mike Jacobs let some younger players get minutes throughout the year.

Sophomore Ryan Stallings is expected to headline the forward ranks after scoring five goals in 10 starts during his freshman campaign.