MLS Academies continue to make a mark on Division I men’s soccer, and at this weekend’s College Cup, it will be no different.

Here’s a look at alumni of MLS youth sides who will see time at PPL Park, as the 2013 season comes to a close, and a national champion will be crowned: 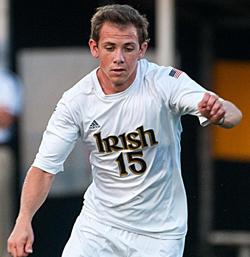 F Harrison Shipp, Notre Dame (Chicago Fire): The Irish talisman will close out his storied career this weekend on the back of a Hermann-worthy 2013 campaign. With 12 goals and 8 assists this far, all he needs to manage are two more big-time performances to help ND over the hump and to a national title.

GK Zackary Steffen, Maryland (Philadelphia Union): It was a sputtering start to the 2013 campaign for Steffen and the Terps back line. But since about midway through the year, the youth international has shown his quality – he was the difference in Maryland’s third round win over Irvine, and could get to showcase himself at his future home in PPL Park.

MF Ben McKendry, New Mexico (Vancouver Whitecaps): A reliable cog in the midfield for the Lobos, the British Columbia native is second on the team in minutes played amongst the field players and will have the task of trying to slow down Shipp and the Irish offense. McKendry is also capable of getting forward to score the occasion

F Darius Madison, Virginia (Philadelphia Union): UVA’s target forward all season does a lot of things very well: holds the ball up, provides the ability to get in behind defenses and can score some very nice goals. He’s another Union alumnus that provides the host stadium’s fan base a glimpse of the not too distant future.

MF Dan Metzger, Maryland (New York Red Bulls): Patrick Mullins and his offensive exploits get a lot of the headlines in College Park, but Matzger has arguably been the team’s most important, if not best player this season. The Red Bulls product played out wide near the start of the season, but settled into a defensive midfield role, protecting a young back line as it went through early season growing pains in 2013.

F Marcus Salandy-Defour, Virginia (D.C. United): Virginia seems to have an abundance of quality attacking players who can fire the offense from the flanks and Salandy-Defour is no different. Expect to see him amongst the starters on Friday night, as he looks to come up big like he did in the ACC semifinals against Notre Dame.

MF Conor Klekota, Notre Dame (Columbus Crew): The Ohio product has an appearance in every game of the season, and has started all three tournament games to this point. If Shipp can’t get going, Klekota has shown a knack to help jump start things in the final third, while also minding the defensive duties in the midfield.

D Suliaman Dainkeh, Maryland (D.C. United): The U.S. U18 MNT defender shook off early season struggles to lock down a starting role at center back. The back line is peaking at the right time, conceding just four goals in the last ten games, all Maryland wins.

MF Jordan Allen, Virginia (Real Salt Lake-AZ): One of the most talented players who will be on display in Philly, Allen’s three goals and five assists on the year represent a modest haul. But he’s got the skills and potential to help push the Cavs to a national title, despite suffering a lower back injury earlier in the tournament.

D Michael Ambrose, Maryland (FC Dallas): The outside back was left on the bench in last year’s semifinal. Don’t expect to see the same thing in 2013. Ambrose moved over to the left side this year, and is second on the team in minutes played; only trailing Steffen in goal. His defending is crucial, but Ambrose also can deliver a dangerous ball on set pieces.

D Kevin McBride, Virginia (D.C. United): The senior center back has started in 21 games this season, after just 11 appearances in the three years prior. He’ll look to win the battle against Patrick Mullins and keep the Terps offense quiet.

D Scott Thomsen, Virginia (New York Red Bulls): After losing his starting job to fellow MLS alumnus Patrick Foss (D.C. United), the sophomore Thomsen has started the last two games at left back, punctuating that with a greet free kick goal in the win over Marquette.

MF Mikias Eticha, Maryland (D.C. United): A junior attacking midfielder, Eticha has cemented his role in the heart of the Terps midfield. He’s not a flashy player by any means, but helps Maryland keep the ball from either a central role or out wide.

MF Michael Sauers, Maryland (D.C. United): Despite his status as a freshman, Sauers has already scored some big goals for the Terps. He tallied the winner against California to get the Terps back to the College Cup, and also scored the decisive goal in the ACC semifinals against Clemson. He can usually be found on one of the Maryland flanks, though usually ends up coming off for stretches of the game.

D/F Nicholas Rochowski, New Mexico (FC Dallas): The defender who has doubled as a target forward, Rochowski has shuffled in and out of the lineup this season, with just 589 minutes and one goal to his name thus far. He’s on the fringe of being involved against the Irish, since he played just two minutes in last weekend’s win against Washington.

GK Patrick Wall, Notre Dame (Houston Dynamo): After splitting time in 2012, Wall has been the starter from day one and played every minute in all 21 Irish games this season. He’ll need to be at his best, particularly from set pieces, against a tall Lobo side.

F James Rogers, New Mexico (Colorado Rapids): New Mexico lost a lot of offensive production from last year’s team with the graduation of now-RSL forward Devon Sandoval. Rogers, a shifty attacker who thrives on the flanks and possesses the pace to stretch defenses, he’s led the Lobos in goals and assists and will need to deliver a massive