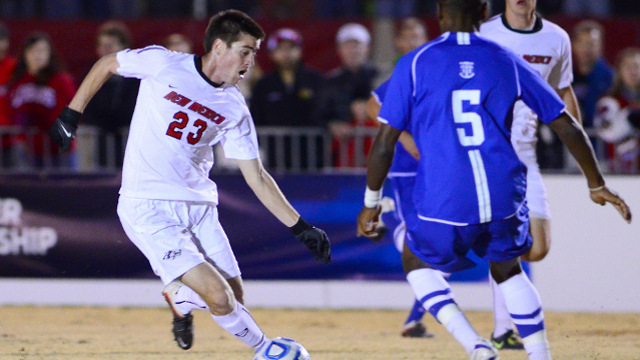 The comparison is not entirely accurate, but there are parts of Smith’s game that remind many of Chris Pontius in college. He has a dynamic burst with the ball at his feet that leaves defenders in the dust. He knows how to get to the endline and whip a cross into the box to set up goals especially this season where he has 12 assists on the year. His finishing is not quite at the level of Pontius, but during his junior campaign he did put 10 goals into the back of the net.

The stats are there for Smith, but he is better than the numbers reflect. There has not been an outside back this season that has been able to contain the Lobos winger for a full 90 minutes. Defensively, there is some work to do in getting him ready for the next level, but there is enough potential to overlook that part of his game.

MF Carlos Alvarez, Connecticut: In his final regular season home game in college, Alvarez found the back of the net in a 2-0 win over Providence. The Big East tournament is next up for the attacking midfielder.

F Will Bates, Virginia: The striker went 110 minutes in a 0-0 draw against Boston College last weekend.

MF Kyle Bekker, Boston College: Also played the full 110 minutes against Virginia in the 0-0 draw between the two ACC teams.

GK James Belshaw, Duke: The netminder made two saves and picked up a shutout as the Blue Devils defeated Virginia Tech 2-0 on Saturday.

F Ashton Bennett, Coastal Carolina: After not finding the score sheet against South Carolina in a mid-week match, Bennett scored two goals and added an assist in a 4-1 win over Radford.

MF Mitchell Cardenas, Campbell: Cardenas had a goal and an assist against UNC Asheville on Saturday. He is third in the nation in total assists with 11 on the season.

F Julian Cardona, Penn State: Found the back of the net and played 74 minutes in a wild 4-4 draw against Ohio State.

D Greg Cochrane, Louisville: Started in a pair of Louisville wins, 1-0 over Cincinnati and UC Irvine 2-1.

MF Paolo DelPiccolo, Louisville: The central midfielder continued his strong from in the end of the season, starting in a couple of wins for Louisville. Also added an assist.

F Ryan Finley, Notre Dame: Very active over the past week, and continues to be a menace off the bench. Scored the tying goal against Marquette on Saturday in a 1-1 draw.

MF Jose Gomez, Creighton: Didn’t get on the score sheet in an 86-minute appearance in a 1-0 win over Missouri State.

GK Scott Goodwin, North Carolina: Picked up his 11th shutout of the season as the Tar Heels won 2-0 over NC State.

MF Ryan Hollingshead, UCLA: Scored the lone goal in UCLA’s 1-0 win over Washington on Monday. Hollingshead strike puts the Bruins back in control of the Pac-12 heading into the final weeks of the season.

F Hakan Ilhan, UNC Greensboro: Scored in a losing effort against Elon, falling 2-1. Now has 7 goals, 7 assists on the year.

D Taylor Kemp, Maryland: The senior left back continues to be sidelined with a sports hernia issue.

M Fernando Monge, UCLA: Started both of UCLA’s games in the Northwest over the weekend, as the Bruins moved closer to the Pac-12 title with two wins.

D Tommy Muller, Georgetown: Started and played 90 minutes in a pair of wins over Seton Hall for the Hoyas, without conceding a goal in either game.

MF Dillon Powers, Notre Dame: It’s been a busy week for Powers, as he played 110 minutes in Saturday’s 1-1 draw against the Golden Eagles, a few days after going the full 90 on Wednesday of last week.

MF Andrew Ribeiro, Creighton: Put in a 90 minute shift against Missouri State as the Bluejays won 1-0.

F Devon Sandoval, New Mexico: Scored his 13th goal of the season in a 3-0 win over Seattle on Sunday. Sandoval leads the Lobos in scoring this season.

D Eric Schoenle, West Virginia: Played 90 minutes in a 1-0 loss against Northern Illinois on the road.

F Blake Smith, New Mexico: Recorded one assist in the Lobos 3-0 win over Seattle on Sunday while playing 80 minutes.

F Donnie Smith, Charlotte: Started both of Charlotte’s games over the weekend, scoring the game winning goal on Friday in a big 1-0 win over Saint Louis.

MF John Stertzer, Maryland: Played 110 minutes in a 2-2 draw against Clemson on Saturday, as the Terps secured the ACC regular season title.

F Chris Thomas, Elon: Continues to lead the nation in goals scored, finding the back of the net in a 2-1 win over UNC Greensboro.

F Emery Welshmen, Oregon State: Netted his Pac-12 leading 10th goal of the season on Friday in a 2-1 loss to UCLA. Welshmen closes out his collegiate career next Friday against Washington.

F Paul Wyatt, James Madison: The senior continues to put up numbers late in the season, scoring an important goal as the Dukes knocked off Georgia State 2-1 in overtime.

MF Bryan Ciesiulka, Marquette (Chicago Fire, Junior): Started and played 110 minutes in a 1-1 draw against Notre Dame on Saturday, then put in a 69 minute shift and picked up an assist in a 3-0 win in the Big East Conference tournament.

D Scott Lakin, Northwestern (Chicago Fire, Junior): Started both of the Northwestern games last week. The Wildcats last 0-1 to NIU in overtime, then played to a 0-0 draw with Wisconsin.

D Chad Barson, Akron (Columbus Crew, Senior): The center back went 90 minutes as Akron continued to dominate MAC competition with a 4-0 win over Hartwick. Put in the same shift in a 1-0 win over Michigan State on Wednesday.

MF Wil Trapp, Akron (Columbus Crew, Sophomore): The midfielder was in the starting lineup and showed well against Hartwick in a comfortable win for the Zips.

D Jalen Robinson, Wake Forest (D.C. United, Freshman): Returned to the field, albeit in a substitute’s role, playing 14 minutes in a 3-1 defeat of South Carolina after missing time with an illness.

MF Daniel Garcia, North Carolina (FC Dallas, Freshman): Scored a goal for Carolina in a 2-0 win over NC State, as he continues to enjoy a strong freshman year.

D Mikey Ambrose, Maryland (FC Dallas, Freshman): Once again started and played 110 minutes at left back for the Terps in their draw against Clemson.

D Bradley Bourgeois, Tulsa (Houston Dynamo, Freshman): Played 87 minutes in the 2-0 loss to Kentucky last week. Bourgeois has started every game this season and played the third most minutes among field players.

MF Scott Caldwell, Akron (New England Revolution, Senior): The attacking midfielder was in fine form, although he wasn’t among any of the goal scorers in a 4-0 win. Notched an assist in an 87 minute effort against Michigan State.

F Sean Okoli, Wake Forest (Seattle Sounders, Sophomore): One of three goal scorers in Wake’s 3-1 win against South Carolina on Saturday. Now has nine goals on the year, already twice as many goals as a year ago.

D DeAndre Yedlin, Akron (Seattle Sounders, Sophomore): Kept his spot at right back against Hartwick as the Zips won big 4-0, while also starting and helping the defense keep a clean sheet in a 1-0 win over Michigan State.