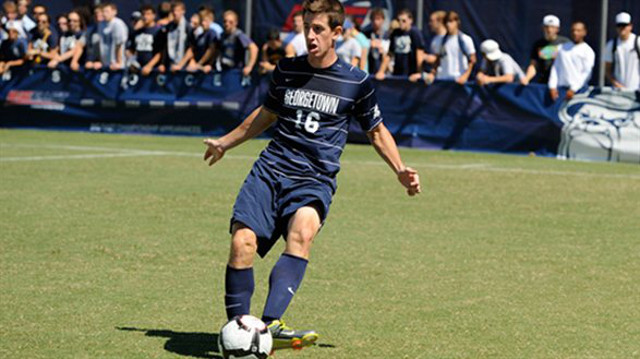 Attributes: Left-footed defender, good pace, joins attack well and knows how to combine down the flank

Left backs are always in dire need, but this year’s senior draft class seems to have a number of decent options, including Georgetown’s Jimmy Nealis.

Almost a four-year starter on what is one of the best teams in the nation this year, Nealis spends a lot of his time on the attack, getting down the left flank to open things up in the box for the plethora of attacking options his team possesses.

With regards to his physical tools, Nealis has good size, a strong sense of when to get forward and add to the attack and when to stay home and keep things tight. However, he will need to specifically prove that he can be defensively consistent in order to earn a contract and time in MLS next season. There’s little questioning that he can do that, it’s a matter of putting it all together.

And while his game may be reminiscent of Seattle’s Marc Burch, Nealis has spent most of his collegiate career as a defender, while Burch was converted to left back after playing collegiately as a forward, so it’s a bit of a variation.

MF Carlos Alvarez, Connecticut: Played 90 minutes and provided the assist on the game-winning goal against Villanova on Sunday.

F Will Bates, Virginia: The striker didn’t score in regulation, but he put in a 110 minute shift as the Cavaliers advanced past Wake Forest with a 5-3 penalty kick win in the ACC tournament.

GK James Belshaw, Duke: His shutout streak came to an end on Tuesday night, as the Blue Devils fell 1-0 on the road to North Carolina. Belshaw’s season might be over if Duke doesn’t get an at large bid in the tournament, which is something of a long shot.

F Ashton Bennett, Coastal Carolina: The speedy striker had a goal and an assist in a 5-0 win over Presbyterian on Tuesday. The Jamaican has 14 goals and seven assists in his senior season.

MF Mitchell Cardenas, Campbell: Finished the week with a goal and three assists in two games, but it was not enough for Campbell to escape the first round of the Big South Championship. Cardenas finishes the regular season with eight goals and 14 assists.

D Greg Cochrane, Louisville: Started in the Cardinals 2-1 loss to Marquette in the quarterfinals of the Big East Tournament.

MF Paolo DelPiccolo, Louisville: Put two shots on frame in Saturday’s contest against Marquette but neither found the back of the net, and Louisville now awaits an at-large bid to the NCAA Tournament.

F Ryan Finley, Notre Dame: The prolific striker was once again an offensive catalyst, scoring a goal and adding an assist in a 4-2 conference tournament win over Syracuse.

D Joe Franco, Cal State Northridge: Named the Big West Defender of the Year earlier this week will help Franco’s draft stock. A run in the NCAA Tournament would do even more for his visibility on the national stage.

MF Jose Gomez, Creighton: Played 90 minutes in the Jays 2-1 win over Evansville last week. Creighton is rolling through the competition with eight wins in a row heading into the conference tournament.

GK Scott Goodwin, North Carolina: His impressive defensive record continued, picking up yet another shutout in a 1-0 win against Duke.

MF Ryan Hollingshead, UCLA: Played a total of 212 minutes in the two overtime games for UCLA last week. Hollingshead and the Bruins are looking to capture the Pac-12 crown this Friday against San Diego State.

D Taylor Kemp, Maryland: The left back made his first start in more than a month on Tuesday night, playing 90 minutes and performing well as the Terps won 2-1.

D Kory Kindle, CSU Bakersfield: Did not play in either Roadrunners game over the weekend. Finished the regular season with six goals in 15 starts for the MPSF program.

M Fernando Monge, UCLA: Named the Pac-12 Player of the Week after recording the golden goal against Stanford then leading the charge in a 1-1 draw against California. It was the first time in his career he received the honor.

D Tommy Muller, Georgetown: Played 90 minutes as the Hoyas booked a spot in the Big East quarterfinal as the center back has left the injury issues behind him.

MF Dillon Powers, Notre Dame: Put in a solid 90 minute shift as the Irish booked a spot in the Big East semifinals with a 4-2 come from behind win over Syracuse.

F Charlie Rugg, Boston College: Remains on the sidelines with a nagging injury as BC exited the ACC tournament on Tuesday evening.

F Devon Sandoval, New Mexico: Pushed his season tally to 14 goals and six assists with a goal and an assist in the 6-0 win over Houston Baptist. The target forward is the leading scorer for the Lobos.

D Eric Schoenle, West Virginia: Despite starting as a center back, Schoenle is the team’s leading scorer after bagging the game winner and helping his defense keep a clean sheet in a 1-0 win over Bowling Green.

F Blake Smith, New Mexico: Provided his 13th assists of the season on Saturday in a 6-0 win over Houston Baptist. Smith is tied for top honors in that category, but leads in assist per game.

F Donnie Smith, Charlotte: Has not appeared in Charlotte’s last two games. The 49ers did capture the Atlantic 10 Conference regular season title despite his absence.

MF John Stertzer, Maryland: The midfielder scored from the penalty spot in Maryland’s 2-1 win over Virginia Tech in the ACC tournament.

F Chris Thomas, Elon: Scored his 22nd goal of the season in Elon’s 2-1 win over Davidson on Saturday. Thomas leads Division I in goals scored with his next closest competition (Ryan Finley, Notre Dame) four goals back.

F Emery Welshmen, Oregon State: The Beavers had the week off in preparation for the final game of the season against Washington on Friday. Welshmen is still tied for top honors in the Pac-12 in goals and points.

F Paul Wyatt, James Madison: Playing mostly in the midfield, Wyatt continues to step up his play in the later stages of the season, scoring twice and adding an assist as JMU won 4-3 in the CAA conference tournament on Monday.

MF Bryan Ciesiulka, Marquette (Chicago Fire, Junior): The Fire product and leader of Marquette had an assist in the 3-0 win over Cincinnati on Wednesday. He then scored the game-winner against Louisville on Saturday to put the Golden Eagles into the Big East Semifinal.

MF Wil Trapp, Akron (Columbus Crew, Sophomore): Continued to provide a steadying presence in the Zips midfield as they picked up a 1-0 win against Western Michigan.

D Jalen Robinson, Wake Forest (D.C. United, Freshman): The center back put in a 110 minute shift in the 2-2 draw against Virginia.

MF Daniel Garcia, North Carolina (FC Dallas, Freshman): The potential ACC freshman of the year came through again for the Tar Heels, scoring the game winning goal in a 1-0 win against Duke.

D Mikey Ambrose, Maryland (FC Dallas, Freshman): With Kemp back in the lineup, Ambrose was the starting right back, going 90 minutes in a 2-1 win in the ACC tournament.

MF Scott Caldwell, Akron (New England Revolution, Senior): Fitting that the senior grabbed the game winning goal on senior night, a 1-0 win over Western Michigan. The attack continues to flow through the midfielder.

F Sean Okoli, Wake Forest (Seattle Sounders, Sophomore): The Sounders product continues to play well. He scored and set up a goal in Wake’s 2-2 draw against Virginia that saw the Deacons get knocked out of the ACC tourney on penalty kicks.

D DeAndre Yedlin, Akron (Seattle Sounders, Sophomore): Played 90 minutes from his right back spot in the 1-0 win over Western Michigan.