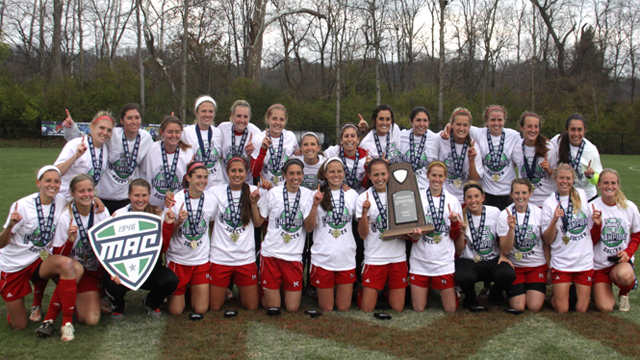 The 2013 in the Metro Atlantic Athletic Conference welcomes the addition of two programs from the Northeast Conference in Monmouth and Quinnipiac and also the exodus of Loyola(w). Monmouth figures to be an immediately challenger in the conference with eight starters back from last season’s squad including star striker Dana Costello who had eight goals and seven assists last year.

The Hawks also hold a commanding record against the MAAC over the years. The Monmouth program has accumulated a 57-10-4 record against its ten league opponents.

However, some of those meetings are distant memories and the league will not be a pushover for Krissy Turner’s squad.

Returning regular season champions Marist and Fairfield both figure to be in the hunt this fall as well. The Red Foxes return attacker Amanda Epstein who led the squad last season with eight goals to push her career tally to 19. The junior attacker, along with the three captains Kylee McIntosh, Samantha Panzner, and Marissa Mertens, will be expected to lead the program, which brought in 11 freshmen during the offseason.

Meanwhile, the Stags are replacing MAAC Defensive Player of the Year Alli Walsh this fall. Walsh anchored a defense that posted 10 shutouts in 2012, which was one of the best in the program’s history. Seniors Sarah Frassetto and Shannon Fay will hope to fill the void left by Walsh. Fifth-year senior midfielder Nikki Stanton will be another key piece to the success of the Stags season.

Another player to watch in the MAAC is Canisius striker Brianna Smith who had a bounce-back season in 2012 with 11 goals in 19 games. Smith only scored three goals in 2011 as a sophomore after 15 goals as a freshman. Smith was an All-MAAC First Team in 2012.

Miami dominated the MAC in 2012, with the league and tournament crowns to occupy the trophy cabinet after a stellar season. The 2013 campaign might not be much different unless a team from the chase pack steps up and challenges the Red Hawks.

Central Michigan was the main threat to the Miami dominance last season, but the Chippewas lost seven starters from that team and are headed for a rebuild this fall. Central Michigan head coach Neil Stafford also moved onto Cincinnati during the offseason. Peter McGahey replaced him at the MAC program. McGahey’s reign started on the right foot with a 1-0 win over Michigan State in the first exhibition game.

Eastern Michigan enjoyed a huge bounce-back year in 2012 with eight wins in conference play after only managing three wins in 2011. The Eagles are looking to build off of that success in 2013 behind junior forward Angela Vultaggio, who had a hat trick in the preseason opener.

Rob Marinaro’s Kent State side is another program that is gearing up for a run in the conference this fall. Marinaro has eight seniors on the squad this fall including 2012 leading scorer Jaclyn Dutton who had 15 goals last year.

Will Dutton and the returners at Kent State be enough to challenge Miami? Or will it be another program from the deep MAC that makes the league into a competitive race?

Hashtag McWorld – that’s the mantra for the Saint Francis Flash season. Thanks to the standout play of forward Tesa McKibben, the three-time NEC Player of the Year, and defender Alecia McNiff, the two-time NEC Defender of the Year, the McWorld cleverness works.

McNiff and McKibben are the class of the conference – by far – and should be dreaming about an NCAA Tournament run. First, the Flash needs to capture the conference tournament crown after coming up just short in 2012 with an upset loss to LIU Brooklyn in the final.

The Blackbirds are the two-time defending champions of the NEC, but have a relatively young squad this fall with sophomore Lucy Gunton-Jones the most prominent returner from the group. Head coach Tracey Bartholomew knows how to get the most out of her group, so its impossible to count out the Blackbirds.

The NEC coaches pegged Sacred Heart to finish third in the conference in the preseason poll. The Pioneers are counting on veteran leadership from Alyssa Brandofino, Sydney Judkins, and Kristin Verrette to navigate the conference and push toward some postseason success.

However, will anyone be able to stop McWorld?