The team has started the current season with a chip on its shoulder as a result, winning the first seven games of the campaign, including a 3-1 defeat of a 10-man Akron side on September 9.

The success is no doubt welcome in South Bend, but the team is keeping itself grounded.

“It’s a good start, but it’s nothing more than that,” Clark told TopDrawerSoccer.com. “It’s certainly an awful lot better than a bad start.”

And while the team isn’t getting carried away, it has certainly provided a lift in the early part of the season. 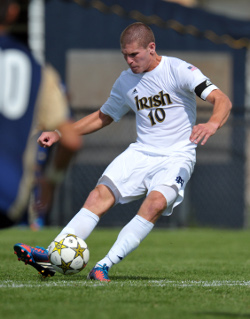 “It’s great to start with so many wins,” midfielder Dillon Powers told TopDrawerSoccer.com. “You really develop a collective belief. You don’t really have to talk about it too much because the wins back themselves up. It’s not really something we’ve had before, but the team is still pretty hungry.”

Last year’s team wasn’t bad, finishing with a 9-5-4 record, but it failed to snag a coveted at-large bid for the NCAA Tournament. While players like Greg Klauzura, Aaron Maund and Brendan King all graduated, a strong core of players remained, including Michael Rose, Powers and Ryan Finley.

So far, those holdovers – although Rose tore his ACL in a preseason match against Chivas Guadalajara – remember the failures of last year quite well and use it to fuel the early days of this year’s slate.

“I think that was a big blow to our pride and I think there’s not a lot of motivating needed in this group,” Clark said.

Right now, things are clicking in the right way on the field, as Notre Dame is figuring out ways to turn close games that ended with overtime losses or ties last year into wins.

Clark cited the example of the season-opening win over Duke at home. The Irish outshot the Blue Devils 18-4, yet only managed a 1-0 win thanks to senior forward Ryan Finley’s tally off the bench.

There have been some two-goal margins of victory as well, and while Clark hopes to see his team tighten things up and provide larger winning margins down the road, he noted how the fine line of the sport is and how things are now breaking the way of this fall’s side.

“I felt last year’s team could have easily been in this same situation,” Clark said. “We’ve got to keep this momentum going.”

This group, while it has seemed to figure out how to make small leads stand up, isn’t becoming overconfident and is taken the one game at a time approach, and getting carried away by chatting about going undefeated.

“You don’t want to start to play not to lose, because I think a lot of teams when you get on a streak or if you start out undefeated you’re scared of losing that first game,” Powers said. “Instead of playing not to lose, we need to continue to have the mentality of let’s go out and win every game. Because I think it does make a difference when you start to get scared of losing a streak or losing a game.”

Another big piece of the team’s on field achievement has been the play of Powers. The former U.S. youth international is fit for the first time since his freshman season, and his impact on games has been telling.

With 2 goals and 2 assists so far, he’s played almost every minute of every game so far and provides plenty of skill and experience that are valuable for the team on the field.

“He’s a different player than he’s been any of the other years,” Clark said.

Given the short schedule of college soccer, momentum is a huge factor in a successful season, and it’s something that Notre Dame has at the moment. And it’s going to come to test this weekend as the Irish begin the Big East schedule with a game against Louisville.

There’s no question that the team recognizes that nothing is won at this point and that everything is left to play for even in the face of a strong start.

“We know we really haven’t accomplished anything yet because we know our record is not going to win us a national championship or help us compete in these games,” Powers said.