The college season is fast and furious – there’s no doubt about that. And for four teams in the TopDrawerSoccer.com Tournament 48 National Ranking, they’ve managed to make it through to this point of the season winning every game.

Perched highest in the rankings is #9 Notre Dame (7-0-0), fresh off wins against Michigan State and Michigan over the past weekend. Patrick Hodan and Harrison Shipp bagged a goal each in a 2-0 defeat of the Spartans, before the Irish maintained perfect form on Sunday with Ryan Finley’s overtime winner in a 1-0 defeat of the Wolverines.

Facing the same slate of matchups this past weekend was #12 Marquette (7-0-0). And like the Irish, it was a pair of close, difficult games against the Michigan teams. Freshman Axel Sjoberg bagged both goals in a come-from-behind win over the Wolverines, and then he played the hero again, heading home the winning goal in overtime to defeat Michigan State 2-1. 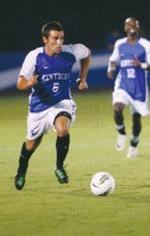 A pair of CAA teams round out the quarter of teams with perfect records. #13 Old Dominion (6-0-0) traveled to Omaha over the weekend, picking up a big win over #7 Creighton 2-1, before following that up with a 4-1 defeat of Drake. #37 George Mason (6-0-0) had just one game over the weekend, seeing off UMBC 2-1 on Saturday.

Outside of the ranks, Cornell (5-0-0) continued to rack in the wins, picking up a fifth straight victory with a 2-1 defeat of Wofford. Daniel Haber scored to winner in the 86th minute.

The Wolfpack entered Friday night’s matchup undefeated with six straight wins, and got a perfect start at home when Martinez – the little brother of Real Salt Lake midfielder Enzo – danced into space in the penalty area and beat Terrapin goalkeeper Keith Cardona at his near post.

However, the depth and strength of Maryland soon took hold of the game, as the Terps grabbed three unanswered goals through Jake Pace, Schillot Tshuma and John Stertzer. Martinez picked up a second goal from the penalty spot to make it 3-2, and the Terps held on for the win.

"This was a heck of an ACC game and a great win tonight," Terps head coach Sasho Cirovski said in a release. "We started brightly but fell behind early and our guys showed tremendous resolve and maturity and equalized at the half.”

Struggling through the first five games of the season, the Wildcats traveled to Louisville looking to right things around.

And Kentucky got the performance they desperately needed, holding on for a 1-0 win against #15 Louisville on Friday evening. Matt Lodge’s 38th minute goal stood up as the winner.

"I couldn't be any more excited for the guys," UK head coach Johan Cedergren said in a release. "This is a huge game for us. For us we are trying to make little steps every game. We were really good in training this week and overall it was a good defensive performance.”

Opening the weekend with a tough 0-0 draw against St. John's, the #9 Akron Zips knew that things needed to be much better in the final third going into a tilt with South Florida on Sunday.

The Akron attacked heeded head coach Caleb Porter’s call to take things to the next level, smashing five goals past a hapless Bulls side en route to a 5-0 win.

Senior Scott Caldwell scored twice, and Dillon Serna scored his first collegiate goal as the Zips found the back of the net four times after the halftime break to erase memories of Friday night’s draw.