There was a common thread running through the NWSL draft picks in a series of phone interviews on Friday: excitement.

Instead of scrambling for playing opportunities overseas, or for little pay here, the National Women’s Soccer League welcomed 32 college seniors to its ranks with an inaugural college draft in Indianapolis. 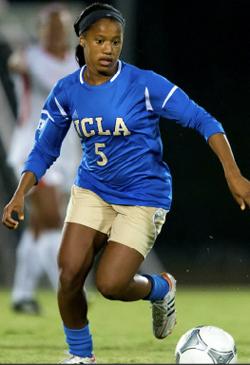 Each of the first round players bubbled with enthusiasm about learning their fate.

“I’m so happy that the U.S. decided to have a league this year,” Mewis said in a conference call. “I was really hoping for it. Of course overseas would be a great experience and maybe in the future I’ll get a chance to do that, but I really wanted to stay in the United States and play in front of the fans.”

The news that Bywaters would be the first pick came with a little bit of a surprise to those who tracked the college game, as Hermann Finalists Caroline Miller, Christine Nairn, or even McCarty seemed just as likely candidates.

It came as a little bit of a shock to the Bruin as well.

“I was very surprised, really excited when [head coach] Rory [Dames] had given me the call letting me know,” Bywaters said. “I’m still kind of in shock with the whole experience, but I’m really looking forward to playing in a professional environment that’s going to help me to grow and help me to help the program as well.”

Nairn lasted to the seventh overall pick, going to the Seattle Reign, while Miller ended up joining McCarty as the Spirit’s second pick of the day, and tenth overall.

Other standouts to come off the board in the first round were BYU center back Lindsi L. Cutshall (Sky Blue FC), Florida State’s Casey Short, Oklahoma State goalkeeper Adrianna  Franch and Florida defender Kathryn Williamson.

Now, the players must adapt to the new realities of professional life, including the opportunity to play with and against the standouts from the U.S., Canadian and Mexican women’s national teams.

For some of the picks, they’ve never had an opportunity to compete against players of that caliber.

“Obviously I’ve never had a chance like this before,” Cutshall said. “It’s super rewarding to think that I can play with and against [national team players], and it’s a great honor to be able to do so.”

But for others, especially Nairn, Mewis and Franch, they’ve been on the fringe of the full national team last year, and hope that this new league provides the right platform to impress new head coach Tom Sermanni.

“I know he’s going to go in with an open mind, scouting a bunch of players and seeing what American soccer is and what youth is coming through and representing a new professional league,” Nairn said. “I’m so excited to know that I’ll play for Seattle but to also see my fellow national team players – Tiff McCarty, Kristen Mewis, Z Bywaters – I’m excited for all of us to be exposed to the new national team coaching staff and hopefully you’ll see at least one of our names in the next upcoming tournament.”

Of course, entering the pro ranks of a new women’s league comes with a dash of skepticism, as two leagues have already shut its doors in the past decade. That didn’t deter some of the giddy new stars from being incredibly optimistic as they get set for a new adventure.

“I’m so excited to be a part of it and I hope to make it so much better than any other league,” Mewis said. “I really think it’s going to work out and going to be awesome.”