One question for each Pac-12 program 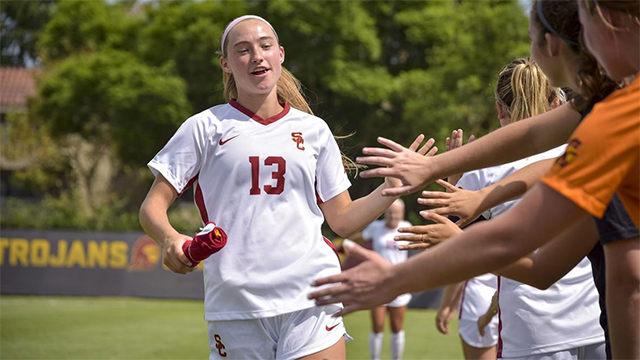 Ryan Kelapire is the editor-in-chief of AZDesertSwarm.com, the Arizona Wildcats SB Nation site. He has covered Pac-12 soccer since 2015 when he served as the Arizona beat writer for the Daily Wildcat, the University of Arizona student newspaper. You can find his Arizona soccer coverage here and follow him on Twitter at @RKelapire. He will be covering women's Pac-12 soccer this season here at TopDrawerSoccer.com.

College soccer is back this week, and it should be another eventful year in the Pac-12, which is loaded with star-studded players.

Before things get underway Thursday, here is one big question facing each squad.

Stanford — Can the Cardinal win the games that matter most?

The Cardinal have only lost one match since August 2017, but it came at the hands of Florida State in the 2018 College Cup Semifinal, denying Stanford a chance at back-to-back titles.

The Cardinal will surely be back in the hunt in 2019. They return TopDrawerSoccer National Player of the Year Catarina Macario and five other all-conference players, as starpower, as usual, is teeming in Palo Alto.

Stanford was picked to win the conference for the fourth straight year, and a schedule quirk has it facing USC on the road but hosting UCLA—two games that should have significant implications on the Pac-12 title race.

UCLA(w) — Can the Bruins stay healthy?

UCLA led the nation in scoring and arguably had the best roster in the country last season, but rarely, if ever, was it all on display at once.

If there is one area UCLA needs to sharpen up, it is on defense, where it ranked 35th in the country in goals-against average. LSU transfer and All-American Lucy Parker should be a big help in that regard.

USC(w) — Can the Trojans avoid another early exit?

The Trojans have not advanced past the Sweet Sixteen since winning the national championship in 2016. They fell to Florida State in penalty kicks in the third round last season after a first-round exit against Baylor the year prior.

USC has a lot of talent to replace, losing All-American forward Leah Pruitt and All-American defender Ally Prisock to graduation, and, recently, All-American midfielder Savannah DeMelo to an Achilles injury.

Still, the Trojans welcome the No. 3 recruiting class and return All-American goalkeeper Kaylie Collins and Pac-12 Freshman of the Year Penelope Hocking, whose 14 goals tied Macario for the conference lead, so they still have enough pieces to be a College Cup contender.

Utah(w) — Can the Utes score enough to reach the NCAA Tournament?

The Utes were the feel-good story of the conference last season, as they managed to finish fourth after going 3-4-1 in non-conference play.

Utah captured major wins against Colorado and Washington State, and secured a draw against USC. If you take away their 5-1 loss to UCLA, the Utes posted a plus-5 goal differential against their Pac-12 counterparts, only allowing six goals in 10 games against teams not named UCLA.

The Utes return nine starters, including goalkeeper Carly Nelson who led the Pac-12 in saves, so it’s possible they can replicate that defensive mettle and make a play for their NCAA Tournament appearance since reaching the Sweet Sixteen in 2016.

Scoring could be a challenge, though. Utah only netted 12 goals in conference play last season and gone are all-conference honorees Paola Van Der Veen and Hailey Skolmoski, who ranked first and third on the team in points, respectively.

Colorado(w) — Will the Buffaloes’ seniors go out with a bang?

The Buffaloes were one of the last unbeaten teams in the country last season, going 13-0-3 to kick off the year.

It all went downhill from there.

The Buffaloes’ schedule stiffened and they dropped four straight to cap the regular season, narrowly missing the NCAA Tournament because they finished outside the top 40 in RPI.

Barton and Kornieck spearheaded a CU offense that ranked 15th in the country in goals per game (2.35), though outside back Erin Greening will be difficult to replace.

Arizona(w) — How will the Wildcats replace Lainey Burdett?

Arizona returns eight starters, but one key departure is star goalkeeper Lainey Burdett, a four-year stalwart who completed her career as the program’s all-time shutouts leader.

The Wildcats kept their cool in close games last season, going 4-1 in conference matches decided by one goal, and Burdett’s presence was a major reason for that.

In her stead will be sophomore Kendyll Humphreys or freshman Hope Hisey, neither of whom have appeared in a college game, though Humphreys did see some unofficial action in the spring when she wasn’t nursing a broken finger.

The good news is that Arizona has an experienced backline to buoy its new netminder, whoever it may be. The quartet of Morgan McGarry, Samantha Falasco, Hallie Pearson, and Sabrina Enciso helped the Wildcats finish fourth in the Pac-12 in goals-against average last season.

The Cougars sprinted to 10-0 start in 2018, but fell off as the season progressed, eventually falling to Georgetown in the second round of the NCAA Tournament.

Some of that regression was caused by injuries, none more critical than the season-ending knee injury that knocked out all-conference goalkeeper Ella Dederick after five games.

Dederick was granted a sixth year of eligibility, and her leadership and penchant for making timely saves could be exactly what the Cougars need to advance further in the postseason.

WSU lost Pac-12 assists leader Maddy Haro, but still possesses a deep mix of talent headlined by senior forward Morgan Weaver, who is coming off a 13-goal season, only trailing Macario and Hocking atop the conference leaderboard.

The Cougars were picked to finish fourth in the Pac-12 preseason coaches poll, their highest preseason ranking in program history.

The Sun Devils doubled their win total in their second season under head coach Graham Winkworth, and while it was not enough to reach the NCAA Tournament, it was a sign that the rebuild is heading in the right direction.

ASU will need other underclassmen to step up after losing playmakers Jemma Purfield, Casey Martinez, two starting defenders and its starting goalkeeper, but Winkworth has shown he is capable of recruiting at a high level by plucking talent from all over the globe.

Oregon(w) — Can the Ducks win on the road?

Last season was the Ducks’ best in a decade, but they went just 1-6 on the road after going 0-7 the previous year.

So, it’s pretty simple: Oregon has to be more successful away from its home turf if it hopes to earn an NCAA Tournament bid.

That is especially true considering its conference road schedule includes Washington, Arizona, Arizona State, Utah and Colorado—the kind of teams the Ducks will be batting to finish in the upper half of the Pac-12.

Four-year starter Halla Hinriksdottir graduated, so the Ducks will be breaking in a new goalkeeper for the first time since 2015.

Washington(w) — Will the Huskies make Lesle Gallimore’s last season a memorable one?

The winningest coach in program history is retiring at the end of the season, and Washington will need to improve quite a bit to make her last go-around a special one.

The Huskies return 10 starters and all but three of the 25 goals they tallied last season, so another year of experience could do them some good.

A favorable conference schedule doesn’t hurt, either. UW hosts Oregon, Arizona, Arizona State, Utah, Colorado and Washington State, and faces USC, UCLA and Stanford on the road, three teams the Huskies are extreme longshots to beat at any venue.

Washington only scored nine goals in conference play and sorely needs another playmaker to emerge. Junior midfielder Olivia Van der Jagt led the Huskies with six goals last season, twice as many as the next leading scorer.

California(w) — How much have the Bears developed?

2018 marked the first time since 2003 that the Golden Bears failed to reach the NCAA Tournament, and youth had plenty to do with their struggles. All but nine of Cal’s 31 players were freshmen or sophomores and, at one point, the Bears started 10 underclassmen.

It was a tough season but one the Bears can grow from. They bring back leading scorers Abi Kim (six goals, seven assists) and Emma Westin (four goals, four assists), and add the No. 10 ranked recruiting class that includes TDS High School All-American Angelina Anderson.

Anderson, once the captain of the Under-17 United States Women’s National Team, could solve the goalkeeping woes that plagued Cal last season. The Bears experimented with three different keepers, but allowed 41 goals, the second-most in the Pac-12.

Oregon State(w) — Can the Beavers be competitive under first-year coach Matt Kagan?

2018 was disastrous for the Beavers, who fired head coach Linus Rhode after 11 seasons.

Replacing him is former Mississippi State assistant Matt Kagan, who has a lot of work ahead of him. The Beavers posted a minus-48 goal differential last season, allowing 54 goals while only scoring six. OSU was shut out in all 10 of its conference losses.

In addition to a new coaching staff, the Beavers added 12 newcomers, including four transfers, so perhaps all the fresh faces will invigorate the team.

It still will be difficult to win games given the competitive nature of the conference, but simply keeping things close—and scoring more than two goals in Pac-12 play—would be a step in the right direction.