Pac-10 features many challengers this year Comments
This is nothing new for B.J. Snow - it just feels like it is.

Snow was named the head coach of the UCLA women’s program earlier this month after Jill Ellis accepted the position of Women’s National Team Development Director for U.S. Soccer.

So one of the marquee programs in the country officially belongs to a first-year coach, though one much more battle-tested than your average apprentice.

“The transition has been great so far, and it has certainly helped that I had (head coaching responsibilities at times last year),” said Snow, who filled in for Ellis on a few occasions last season while she was fulfilling duties for U.S. Soccer. “It’s been great for the girls and the program in not having to go outside the bubble – not much has been new.” 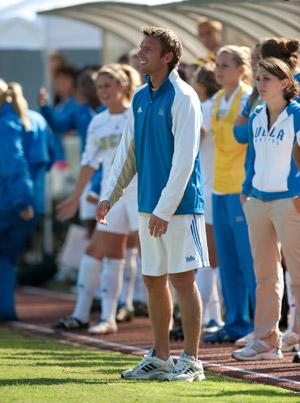 The immediate challenge will likely look the same as it has the last couple years: to beat Stanford.

And ditto for the ultimate goal: to win their first national championship.

And if recent history is any indication, one might very well beget the other.

The Cardinal has claimed the last two Pac-10 titles while reaching the national title game in each of the past two seasons. And they’ve done it while eliminating UCLA from the NCAA Tourney the last two years – just in case the Bruins were unsure about their chief rival these days.

Yes, Stanford has lost queen goal-scorer Christen Press to the professional ranks, but they’re still stacked with the likes of Alina Garciamendez, Teresa Noyola, Lindsay Taylor, Camille Levin, Rachel Quon, and so on …

So they’re not going anywhere.

And neither is Oregon State, a young team that made the leap to conference contender last year (finishing second) behind players like Chelsea Buckland, Jenna Richardson and Courtney Wetzel.

The Pac-10 challengers are mounting all around, but Snow is quite aware. A former Indiana standout and national champion as a player, he’s been an assistant at UCLA for the last five years and has helped build the standard his players will now adhere to.

“There will be new nuances here and there (with me as coach) but I don’t need to reinvent the wheel,” he said. “Our philosophy around here is to emphasize the development of the individual and be accountable on and off the field. Our goals will be the same.”
Headlines
College Rankings HQ
View all rankings >>