Pac-12 recap: Stanford at the summit 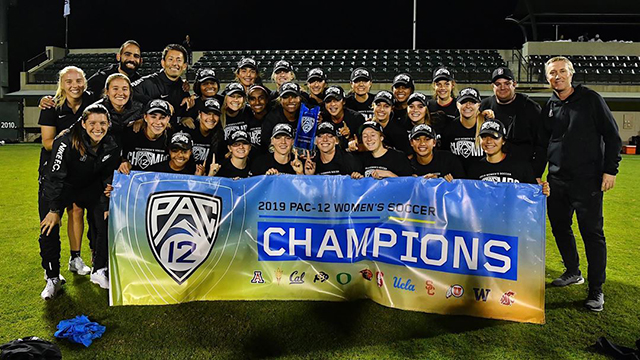 The penultimate week of Pac-12 play is in the books. Here are some takeaways along with a look at what is at stake in the final week of conference play.

The Cardinal dispatched Arizona and Arizona State to clinch their fifth straight Pac-12 championship. However, their eight-game shutout streak was snapped Sunday by the Wildcats in a 6-2 shootout.

Catarina Macario added three goals and three assists to her ledger over the weekend, giving her 62 points on the season, 27 more than USC’s Tara McKeown, who is second in the Pac-12 with 35.

Winners of 12 straight, Stanford can complete a perfect conference season by beating California at home Friday. Not only are the Cardinal 10-0 in Pac-12 play, they have posted a staggering 37-4 goal differential.

USC and UCLA came away with a sweep in Oregon and now sit at 7-3 in the Pac-12, putting them in a tie for second place heading into this weekend’s rivalry game in Westwood.

To make the stakes even higher, a No. 1 national seed in the NCAA Tournament could be on the line for both teams.

The Bruins have won three in a row against USC.

Redshirt senior Chloe Castaneda shined for the Bruins last weekend, notching two goals and an assist in a 4-0 victory over Oregon State, her first tallies of the season.

The Beavers, losers of three straight, might need to beat Oregon on Thursday to clinch an NCAA Tournament berth.

🔥 @chloe_castaneda is feeling it tonight, scoring both of UCLA's goals in the first half.

At this time last week, Washington was in sole possession of second place and one of the hottest teams in the conference. But UW was swept at home by Utah and Colorado and now is tied for fourth with Cal.

Depending how their rivalry game goes against Washington State, the Huskies can still finish as high as third in the Pac-12 but also as low as sixth. Either way, UW has already done enough to secure a spot in the NCAA Tournament.

Meanwhile, Colorado probably put itself on the right side of the postseason bubble by beating Washington in Seattle. A 79th-minute goal by Hannah Sharts was the lone goal in that match, her first since transferring from UCLA.

A victory at Utah this week would remove any doubt about CU’s postseason status.

It’s safe to say WSU senior Morgan Weaver will be the Pac-12 Offensive Player of the Week when weekly honors are announced Tuesday. She had six goals and an assist in a pair of 4-1 wins over Utah and Colorado. That included a four-goal outing against Colorado on Senior Day.

The Cougars were able to snap a two-game losing streak and head into Friday’s rivalry game at Washington with a chance to finish fourth in the Pac-12 with a win and a Cal loss to Stanford.

WSU is a lock for the postseason.

HIGHLIGHT | A perfect ball and a perfect finish for the seniors on senior day#GoCougs pic.twitter.com/xRrRwcXqX9

The Wildcats lost 3-0 to Cal on Thursday despite owning a 19-7 shot differential. Cal goalkeeper Angelina Anderson deserves a ton of credit for making a career-high 10 saves, continuing her stellar freshman season.

Then Arizona predictably lost to Stanford on Sunday to complete a winless trip to the Bay Area. Jill Aguilera had a brace in that game, as the Wildcats joined USC as the only Pac-12 team to score against Stanford this season.

Arizona caps the regular season at home Friday against last-place Arizona State. A loss to the Sun Devils could have significant ramifications. Arizona would be unlikely to host the first round and could even fall out of the NCAA Tournament field altogether.

Fortunately for the Wildcats, they have had no trouble with the Sun Devils recently, winning three straight in that series.

California back in familiar territory

After a down year in 2018 that saw Cal win five games, the Golden Bears picked up their 12th and 13th wins of 2019 by sweeping the Arizona schools, their highest win total since 2014.

Mia Corbin had a Senior Day to remember, netting a penalty kick in the 76th minute to down the Sun Devil in Berkeley.

Cal is now guaranteed to finish in the upper half of the Pac-12 for the 15th time in the last 16 seasons.

The Bears are unbeaten in their last seven matches and can spoil Stanford’s perfect conference season Friday in Palo Alto. Cal has lost three straight in that series.