Like other mid-major conferences across the country, the Patriot League is a close battle.

Four points were all that separated first place from fifth place, and heading into the fall, it’s anybody’s game. American ended up at the top of the heap in 2011, and is going to be in the hunt for a first place finish again.

However, the teams across the country are rapidly improving, and expect Colgate, Lehigh and Navy to be in the running as well.

A poor overall record out of the conference? No problem for American, which won the conference regular season title thanks to a strong improvement by season’s end.

Only one win in the first eight games of 2011 didn’t bode well, but the team turned it around to grab the first place accomplishment, though a loss in the conference tournament to Colgate spelled the end to their NCAA tournament hopes. 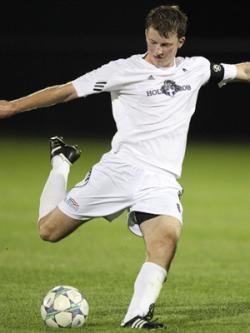 Trying to inspire a more complete season will be forward Alasane Kane, the team’s leading scorer from a year ago, as well as senior midfielder Ryan Morales, and fourth year defender Adem Gokturk.

Two big pieces have left Colgate after an outstanding season, as Conference Player of the Year Steven Miller graduated, and the league’s Rookie of the Year Jimmy McLaughlin signed a Home Grown contract with the Philadelphia Union.

However, head coach Erik Ronning still has the pieces in place to replicate their strong form of a year ago.

“We’ve got a veteran team, I think as always the challenge in this league, because there’s so much parity, is just finding a way to get into that Patriot League tournament and hopefully peaking at the right time,” he told TopDrawerSoccer.com in an interview.

Among the returning players are All Conference players like defender Patrick Letourneau, midfielder Shane Conlin and goalkeeper Grant Reed.

Replacing Miller’s 12 goals last season is going to be the biggest task, as he accounted for nearly half of Colgate’s goal scoring for the entire season. But Ronning has faith.

“We think we’ve got a group that not only can contend for a Patriot League title but also make some noise in the NCAA tournament,” he said.

A tight defense was Lehigh’s strength a year ago, as the team conceded only eight goals in a total of 18 games.

Ali Famili and Cameron Omsberg both return from the back line, same with First Team All Conference goalkeeper Ciaran Nugent, who will be a junior. There’s little doubt that the team will want to improve on that mark in the coming season.

However, the onus is on the offense to help this program take another step forward, as the team averaged just a goal a game, necessitating more goals from an attack that lost leading scorer Joe Puelo.

One of the recruiting coups of the incoming freshmen class in all the nation fell to Navy when they snagged Pateadores center back Derek Vogel as part of this fall’s class.

The U.S. youth international will likely start as center back right away, and help improve a defense that was already pretty decent a year ago, only conceding 13 goals last season.

Finding the back of the net more often is going to be the key to the upcoming year and climbing the ladder in the league – a lot of that will fall on the shoulders of junior forward Dave Arnold, the team’s leading scorer a year ago.

Led by returning All Conference midfielders (and seniors) Sean Peckham and Kyle Scharfenberg, Lafayette wasn’t too far off the summit last year and will look to capitalize with a number of experienced returners.

Defender Julian Plummer leads the team at the back, while Scharfenberg provided the offensive punch with seven goals last season.

The large incoming class is going to be one of the dominant things for Army to adjust to this year, as 13 new players are listed on the 2012 roster.

But the team doesn’t lack experience or firepower in certain parts of the field, with the return of leading scorer Josh Koeppe returns on the back of a selection to the All Conference team.

However, Koeppe led the team with just four goals, and like other teams, they’ll need some more goals in order to be a bit more competitive this time around. Joining the team up front will be incoming freshmen Nick Baietti, Cody Giddings and Jordan Lee – if one of them makes the adjustment and can start banging in goals, it’ll inject a lot of optimism into the team this fall.

Contending for the upper half of the Patriot League doesn’t seem to be too far away from Bucknell’s reach, with a smattering of returning players to complement a strong incoming class.

Left back Mayowa Alli was the team’s leading scorer from a year ago with seven goals – he’ll need some help in that department if the Bisons are to climb the standings.

Rising senior forward Brendan Burgdorf needs to be one of those players, same with Josh Plump, who will also be in his fourth year.

If this coming year is to show improvement for Holy Cross improving the team in front of goal is critical. The team’s offense ranked last in almost every offensive-related team category in the conference, including shots and goals.

Add in that they also conceded the most goals of any of the eight Patriot League teams, and it’s understandable why they managed just the single win all year in the league.

As a result of last year’s struggles, Marco Koolman was appointed the team’s new head coach, and he’ll look to lead the group to a better overall performance this coming year.