Coaches and players alike are expecting another close, difficult to project season within the division. 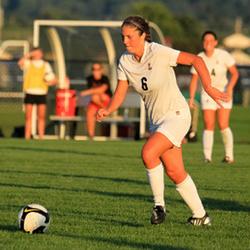 “I think one of the beauties of the Patriot League is it’s always rather competitive from top to bottom,” Lafayette head coach Mick Stahtham told TopDrawerSoccer.com. “It’s virtually impossible to fully predict score lines.”

Echoed Navy coach Carin Gaberra: “It’s hard to predict because all the teams have raised their level the last couple years. The parity is better, and any given game you’re never really certain who might win, and it didn’t used to be that way many, many years ago.”

There’s certain to be plenty of drama as the season unfolds, and the likes of Lafayette, Army, Colgate and others aim to claim the top spot.

Last year’s successful season ended in disappointment for Colgate when they lost in the semifinals of the Patriot League conference tournament, denying them a chance at the NCAA Tournament.

However, there are plenty of reasons to be positive for another strong campaign as offensive cogs Jillian Kinter (senior) and Jenna Raepple (sophomore) are among this fall’s returning players.

In all, the return of a significant number of players means Colgate is likely to make another regular season conference run, with goalkeeper Ashley Walsh, defenders Sarah Henderson and Kelsey Hough also in those ranks.

It’s safe to say that Lafayette caught some of their opposition off guard en route to a second place finish in conference.

“[This year] is going to be a little different than last year because we had a really strong season last year and I think that somewhat surprised people,” midfielder Allison Stone told TopDrawerSoccer.com. “I don’t think our team’s going to be as much of a surprise this season.”

Nine seniors departed from last year’s team, but a strong spine remains, including goalkeeper Lauren Smedley (two-time Patriot GK of the Year), Stone, a central midfielder and Jill Dozier, a forward who will be called upon to provide most of the goal-scoring punch.

One of the keys to success this year will be not only a healthy 11, but also their entire team.

“It’s a squad game for us – I don’t play 11 kids,” head coach Mick Statham told TopDrawerSoccer.com. “The whole squad is going to have to be available, injury free.”

Only two seniors departed from the 2011 Navy side that placed third in the conference.

And while last year the team dealt with inexperience, there’s hope that with the majority of the team returning, players can lean on last year to push on towards a successful season.

“I’m hoping that being young now will benefit us,” head coach Carin Gabarra told TopDrawerSoccer.com, “because we’ll be young but we won’t necessarily be inexperienced.”

There isn’t a stand out or star player on this deep Navy roster, but forwards Paloma Perez and Morgan Dankanich scored big goals for the team last season – and that pair duplicating last year’s form is certainly going to be crucial.

With a goals-against average of 0.91 per game, good for third best in the league, Navy knows how to keep the ball out of their net, and that’s down to the team’s ability to defend as a unit, another characteristic of last fall’s good record.

But Gabarra, who is aspiring to contend for a conference title and tournament bid, knows it won’t be easy to duplicate that form.

“We’ve got a challenging schedule, and some very good games,” she said.

Fred Thompson assumed the role of interim head coach this summer, and it gives Army a new face in charge of a program that made it into the NCAA tournament last fall.

However, Thompson is hardly a new face to Army, seeing that he served as the team’s associate head coach over the past three years. He’ll have his hands full trying to replicate the success of last year, with the loss of five seniors.

Defense was the key to Army’s 2011 success, and a similar formula might see them contend once again, as they had 15 shut outs in 21 games and allowed just 10 goals. The starting goalkeeper from last year’s team graduated, but Conference Defender of the Year Molly McGuigan is back for more.

Goals of course are required to win games as well, and Patriot League leading scorer Kim An, who bagged 10 goals as a freshman and Joey Molacek will look to guide the team in the final third.

It’s going to take a much improved effort in front of goal in order for Bucknell to really challenge this coming fall.

Four seniors have moved on from last year’s team that scored only ten goals on the year in a total of 16 games. More offense is needed from Kayla Yee and Taryn Boucher, who led the team with just two goals apiece last year.

The reason Bucknell’s managed to stick around games despite a sputtering offense was due to an outstanding season from goalkeeper Sandita McDermott who earned a nod as second team All League last fall. She’ll be a senior in the fall.

Could Lehigh spring a surprise this fall?

A number of players are coming back, with leading scorer Murphee Greeley, Isabelle Li and goalkeeper Ashley Blanks all back.

Greeley in particular could have a big role to play, seeing that it’s her junior year, and she scored three goals and five goals respectively. Creating more goal-scoring chances is definitely a must for the Mountain Hawks to improve.

From a defensive perspective, American weren’t good enough to find success a year ago, conceding a league high 30 goals in 19 games. A decent amount of turnover means there will be new faces at the back, but defender Stephanie Glover returns.

Up front, All Conference forward Jasmine Mohandesi is going to need some help to provide enough offensive punch if the team can’t erase defensive shortcomings and climb the standings.

Struggles in the offensive third last year consigned Holy Cross to a poor season, as they could only muster a total of seven goals in 17 games.

That’s a number that needs to come down quite a bit if any kind of a turnaround can be engineered in the fall. Freshmen Gina Righini, Second Team All Conference, can have a lot to say about inspiring improvement.