Commerce, MI – The Rover City Rovers lost 5-0 to the Michigan Bucks on a pleasant spring evening. It was pleasant for everyone except for the Rovers’ coaching staff.

Michigan scored 5 first half goals and hung around for the second half.

It’s an extremely difficult to assess players from both teams, because Michigan was so dominant in the first half that the competition was not nearly the same standard and so passive in the second.

The Rovers are from Louisville. While the Rovers looked better in the second half, I think it was more reflective that Michigan was just cruising.

Goalkeeper Kees Heemskerk (College of Charleston) can’t be blamed for all 5 goals in the half. He certainly fumbled the ball for the fourth goal into the goal. On the second goal, he didn’t make the play on a 1v1 which might have encouraged his team to continue to play. I can’t blame the Rovers for replacing him with Matthew Soyka (Bellarmine D2) at half-time. I’ve seen Heemskerk play much better – actually, this is the worst that I’ve ever seen him play. 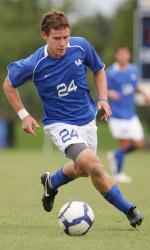 Jacob Kemper
Albert Edwards was the best attacking option in both halves from his right back position (in the first half) and center back (in the second half). He has superior speed, power on the dribble. In the 57th minute, he hit the cross-bar with a 25 yard strike. In the 28th minute, Edwards was storming up the line, but Thomas Catalano (Oakland) tripped him. In the 44th minute, Edwards was flying up the sideline and Benjamin Hunt (UCF) up-ended him. The Rovers coach was inconsolable – I guess this was a weak attempt to deflect attention from the wrong side of the 5-0 score.

Edwards had a poor turn going into traffic in the 15th minute. He needs to get his head up quicker.

Another player who had a spark was “Ace” Gonya (Lindsey Wilson NAIA). In the 8th minute, he outran and outmuscled Felipe Souza (Oklahoma Baptist NAIA) from a long pass by Nate Driggers (Bellarmine D2). Gonya brought the ball down quickly, but his shot was too close and the Bucks goalkeeper Mitch Hildebrandt (Oakland) handled this easily. In the 40th minute, Driggers got up the sideline and crossed the ball to Gonya on the far post, but clumsily went up with right foot rather than using the more available left foot and it was off-target. Gonya didn’t get much more service than this.

Jacob Kemper (Kentucky) made a nice turn on the sideline attacking into the middle of the field in the 75th minute.

Scoring 5 goals in the 1st half is a remarkable accomplishment. However, standing around for the 2nd half is not. I’ve seen cows in the middle of a hot scorching pasture in July move with more enthusiasm than Michigan did in the 2nd half. This wasn’t a player or two, but reflective on the team as a whole.

The first goal was scored by Stewart Givens in the 17th minute. The play started with a Luke Holmes (Akron) 30 yard free kick to the far post that Kenny Uzoigwe headed back across the goal seemingly goal-bound but Givens propelled himself with a diving header from 2 yards into the goal.

Luke Holmes
In the 19th minute, Holmes got on the scoreboard. Adam Shaw (Michigan) sliced a ball through the defense. Holmes circled into the box and slotted the ball past the goalkeeper.

The end of game occurred in the 36th minute on a Stefan St. Louis goal. On the play, Thomas Catalano (Oakland) dribbled around the defense, straddling the end-line before centering the ball to an open St. Louis who touched it in from 6 yards. The only player close to St. Louis was teammate Uzoigwe. Perhaps, River City was relying on Uzoigwe to mark St. Louis. In this case, PDL team of the week, Uzoigwe failed.

The fourth goal was abysmal. It was scored in the 38th minute by Catalano, but was more a goalkeeping error than goal-scoring prowess. The play started with Holmes serving in a corner kick that Catalano mis-hit through a crowd. Heemskerk stopped the shot but fumbled it into the goal.

The fifth goal was scored in the 43rd minute by St Louis. Holmes made a cross to St Louis. With no one closing (not even Uzoigwe), St. Louis curled the ball into the upper corner.

Holmes with a goal and 3 assists (I’m giving him the second assist on the first goal) was a productive player that show flashes with accurate passes and exemplary vision.

St. Louis with 2 goals continues to excel whenever I watch him play - since his days at Oakland. If he would just pay me to watch, he could make millions in Europe! Well, maybe not. In the 14th minute, Shaw provided service to St. Louis into the box, but St. Louis was able to get around the goalkeeper but couldn’t stop the ball from going over the end line.

Shaw is a heady player and is an important contributor for setting the play.

Catalano’s game is predicated upon hustle which he does in abundance. In the 22nd minute, he dropped a long ball onto Uzoigwe’s feet, but he took a poor shot.

Givens long throws (40 yards on a rope) are a weapon. He made several dangerous crosses like he did in the 22nd minute finding Uzoigwe’s head, but the header was high.

Even Simon Omekanda was a winner though he wasn’t on the game day roster. He won the 50/50 raffle, so I expect that he’ll be picking up the first round!

Goalkeeper Mitch Hildebrandt (Oakland) didn’t have much to do – only facing 2 shots in 45 minutes. Daniel Withrow (Marshall) was pressured more, but was able to squelch all the shots – but it wasn’t as a tidy performance as Hildebrandt.
Headlines
College Rankings HQ
View all rankings >>