Fredricksburg, VA – Covering my first PDL game on a beautiful spring afternoon, the West Virginia Chaos trundled the Fredericksburg Hotspur 4-0.  With less than 16 hours rest since their last match (against Carolina), West Virginia were remarkably able to recover and dominate this game.

The Chaos was vastly superior.

In the 15th minute, Rob Vincent (University of Charleston D2) opened the scoring on a penalty kick that was earned when Fredericksburg Hotspur’s David Contee (Newberry D2) handled a ball from a corner kick. 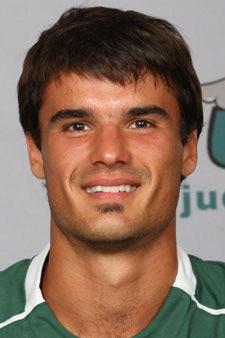 Predrag Ivanovic
The lead was doubled by Predrag Ivanovic (Jacksonville) 45 seconds later.  The play started with Jamie Davies getting the ball to Vincent who served a long ball down the line that Dion Peters (University of Charleston D2) was able to corral before laying it off to Davies.  Davies crossed the ball to the far side where Justin Garton put it back across the goal mouth finding Ivanovich unmarked and he touched in the 4 yard shot from the middle of the goal mouth.  Too easy.

In the 78th minute, the contest was virtually ended when Vincent delivered a through ball to Orlando Zapata (Rio Grande NAIA) who was able to feint away from Mitchell Mori (James Madison) to face the goal keeper, Ryan Taylor, 1v1.  Zapata skipped around Taylor before kicking the ball into the empty net.

2 minutes later, Zapata scored the fourth goal with a similar goal scoring play except he shot past the goal keeper in the 81st minute.

With a goal and 2 assists, Vincent was not only productive, but he was the linchpin to the attack.  Vincent sits back in the midfield as an outlet.  He accurately sprays balls around the field with accuracy and pace.  He’s a very good player on both sides of the ball.  He reminds me of Sam Cronin.  He’s the class of this team.

Peters has exceptional quickness, exploding out of his turns.  He’s a shifty dribbler.  If anything, I’d like him to finish more of his shots.  He had several break-aways and didn’t capitalize on these opportunities.

Richard Isberner (Rio Grande NAIA) is a tall, beefy forward with smooth ball control but lacks the speed to separate.  Additionally, his finishing is unrefined as well.

Ivanovich combines with Vincent to patrol the central midfield.  Ivanovich created a sensational opportunity in the 34th minute, holding the ball until he could slip it past Nik Conklin (Long Island University(m)) setting up Isberner 1v1.  Isberner’s shot hit the post.

Garton was a force on the left side as both a target for long balls, holding the ball and distributing into the box.  In the 21st minute, Garton took a weak punch from the Hotspur goalkeeper, sidestepped Nathan Foglesong (Old Dominion) and hit the cross-bar on a looping shot.

The West Virginia defense in general wasn’t challenged with quality chances from Fredericksburg Hotspur sufficiently to assess them adequately.

One of their more technical players, Santos Ramirez was gassed after 10 minutes, having trouble getting back.  Later in the half, he reminded me of watching a fat, slow, old man e trying to get up the line – and I know fat, slow, old men soccer players!  Because of this lack of fitness, his technical skills deteriorated as the match progressed. 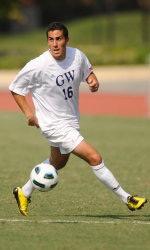 Zach Abaie
Without goalkeeper Ryan Taylor’s heroics, the score would have been significantly worse.  Taylor made countless 1v1 stops. I have to question his communication skills, because they consistently allowed players into their box without proper marking.

When Ryan Sappington (Bucknell) was inserted into the game in the 30th minute, the Hotspur’s play improved.  He’s calm with the ball at his feet and he’s a good passer.  He was a marked improvement over Vincent Llana (Longwood).

Zach Abaie (George Washington) was another player that had a sniff of knowing how to play. He’s good technically.  In the 49th minute, he made a sweet turn before hooking the ball just wide of the goal.  He has potential.  However, he isn’t well integrated into the team.

Nik Conklin (Long Island University(m)) is an intriguing player.  He has excellent speed and was effective in the second half as the left back – rather than center back – getting up the line.  But, he lacks concentration to effectively clear the ball. Also, Conklin doesn’t track the ball in the air well – allowing it get over his head.  Lastly, in the 67th minute, he exploded through the middle of the field with the ball and most of West Virginia behind him.  With acres of space behind the last few defenders, instead of putting the ball into this space, Conklin decided to play the ball back.  Of course, Conklin didn’t have anywhere to go and the play died right there.

David Contee (Newberry D2) had a dreadful 24 minutes before being subbed out of the game.  He was beaten thoroughly.  He’s too slow distributing the ball.

Glenn Gray (Mary Washington) doesn’t mark.  In the 13th minute, he needlessly passed the ball to West Virginia Chaos without pressure in his own third.

Charles Perrin (Shenandoah D3) was equally poor in surrendering the ball.  He had a hard time defending the left side.

Douglas Boateng (Elon) is fast and he led the team in being off-side.  Boateng telegraphs his first touch and he squibs his shots.
Headlines
College Rankings HQ
View all rankings >>