The qualifying tournament for the U.S. U20 Men’s National Team is a long way off, but Tab Ramos is hard at work trying to identify and prepare the next crop of young American talent.

With just under a year till his side will be tested at CONCACAF qualifying, Ramos is getting another opportunity to look at the current U20 pool, calling up 24 players for a week-long camp in Portland, Oregon, lasting from April 9-16.

He enters this camp with a firm objective in mind.

“This is my third camp of the year, the most important thing to accomplish now is to try and see and identify more players that we can compare to everyone else,” he told TopDrawerSoccer.com. “At this point we have 10 new players coming into this camp and I’m looking forward to seeing them and the ones who are returning as well.” 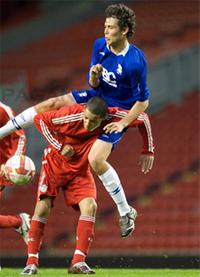 This particular camp features six hold overs from the first two camps of the year, with another 10 new faces getting the opportunity to impress Ramos and the rest of his coaching staff.

And while the former U.S. Men’s National Team player isn’t rushing anything, he already has the team-building process in mind, insinuating that this is the final time a camp will feature a significant number of new players.

“I can’t tell you that I’m taking my time, that’s for sure,” he said. “I’m trying to use these three first camps purely as identification. From here on in, yes of course they’ll be the possibility of one or two players at different camps. But for the most part I’m going to start building the team towards qualifying.”

One of the biggest obstacles Ramos faces when assembling players for a camp is getting everyone he wants. That’s something Ramos expected before even taking the job and he does his best to cope with it.

“Getting players released is an incredible challenge,” he said. “But it’s one I knew coming into this position, I knew how things work so it’s just something I have to deal with. Obviously from here on in, I would like to have all the best players I can for every single camp, but it’s just not doable. So sometimes we have to work with clubs and figure out which camps are good for some players and which camps are good for others.”

Ramos’ latest camp is the same blend of players at different stages of their career, with academy, college and pro players all going to be in attendance. Pro standouts, including the likes of Real Salt Lake midfielder Luis Gil and Birmingham City’s Will Packwood, are favorites to form at least part of this cycle’s core.

During the camp, the U20s are scheduled to play both the University of Portland and University of Washington, along with an intrasquad scrimmage featuring the 24 players in camp.

Tactics are going to be a part of the process as well, but the highest priority remains the process of identifying players.

“We’ve been training and playing out of a 4-3-3,” Ramos said. “But the important thing to recognize at this point is that we’re just looking for good players. At the point when we’re done identifying the best players we have available, obviously we’d like to play a certain way but I think what’s going to determine the way we play is the players that we have.”

One of the youngest players in camp is D.C. United Academy attacking midfielder Collin Martin. A standout for D.C.’s U18 team, Martin is graduating from high school early this year in order to attend Wake Forest this fall.

Ramos has high hopes for the 17-year-old who is set to appear at his third camp of 2012.

“I think the first camp he was possibly a little bit shy and he didn’t show what I think he can,” Ramos said. “I had seen him play in Academy before so I know what type of aggressiveness and determination he had. When you combine that with the type of skill that he possesses, I think he has a good future… I’m hoping he’ll be a big part of the team but the next six-eight months will dictate that.”

Another young talent, Charles Renken, didn’t make the roster as he continues to try and resurrect his pro career with the Portland Timbers after a series of injuries ended his stint in Europe.

“He’s a good player, we saw him in Germany [last November] when we went to that camp,” Ramos said. “We thought that he was a little bit far back maybe related to all the injuries he’s had over the years. [I’m] really looking forward to see how he develops in Portland.”

For Renken, and the rest of the U20 player pool, that six to eight month time frame is going to determine what next year’s qualification team will look like.