With one round of the NCAA Women’s College Soccer Tournament on the books, Stanford remains #1 in our TopDrawerSoccer.com Tournament 64 National Ranking.

Prior to field selection, the ranking is an effort to project the women's college soccer postseason NCAA Tournament field of 64 each week, including the automatic qualifiers from every DI conference. The ranking update is posted each Monday after reviewing all results from the previous week. With the field selected and tournament underway, the ranking now reflects actual tournament performance, round-by-round. 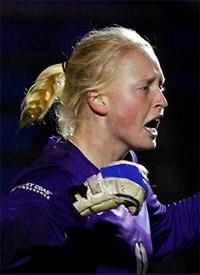 Following the Cardinal are BYU, Marquette, Virginia and San Diego State, all first-round winners. Among teams bowing out in the first round (and thus ranked 33-64) are Miami (FL), Central Michigan and Long Beach State.

Meanwhile Portland’s Erin Dees is our TopDrawerSoccer.com Player of the Week after her goalkeeping heroics Friday night in a win over Washington State. Three times the Cougars had a spot kick to win the match and each time Dees made the save to keep her team alive. The Pilots went on to win in the ninth round of PKs. The honor, along with the 11-player Team of the Week, is awarded each week after a review of match reports through DI women’s college soccer.

F: Jessica Ringwood, BYU – Had a goal and an assist in a 2-1 win over Utah State.

F: Erika Tymrak, Florida – Recorded a goal and an assist in a 2-0 win over Florida Gulf Coast(w).

F: Hannah Keane, San Diego State – Had a goal and an assist in a 3-0 win over Cal State Northridge(w).