Matt Hedges, C.J. Sapong, Andrew Wenger, and Corey Hertzog all have something in common.

The quartet of current MLS players – and some of the best college products of the last few years – all spent at least one summer honing their skills in the Premier Development League for Reading United.

This summer, Reading attracted another group of some of the best college players from across the country, and is again poised to send a handful of alumni to the professional ranks in the not too distant future. 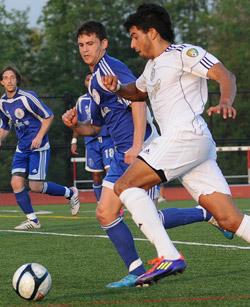 That combination of talent has Reading currently on top of the Mid Atlantic Division standings, unbeaten through the first five games of the PDL season.

One of the challenges presented by the setup of the PDL is the fact that most of the players haven’t played together in recent history. According to Burke, there’s a small core on this summer’s team that has helped the new players through the first part of the season.

“We do have that handful of five or six guys that have been with us at least a year and kind of know the program and know the drill as far as I’m concerned,” Burke said. “That helps the other players adjust a little more quickly to the rigors of the schedule, having a game every three or four days pretty much throughout the summer.”

And of course, for the college players on the team, playing for a team as talented as Reading provides a significant challenge, as the competition for eleven starting spots is extremely fierce.

Along with possessing the ability to attract top talent to create that difficult training environment, Reading also has a relationship with MLS club Philadelphia Union. Burke serves as the head coach for the club’s reserve team as well as an assistant youth director.

This offers the Union an extra way to scout college players, but it also presents Reading players a chance to measure up against pro-level competition during the summer.

“I’m able to give a lot of information to the first team staff on top college prospects that come through our program and even some of the teams we play against,” Burke said. “I keep informed on who’s doing well in the league and things like that. And I think that the opportunity for kids like last year, we had a couple of kids train with the first team because they had performed well with the PDL team.”

Players also get the chance to play in front of Peter Nowak and the rest of the Union coaching staff – which they did on June 9, with the Union defeating Reading 3-2.

Of course, as the players are seeking to improve as individuals, it creates an interesting challenge for Burke as he seeks to build a cohesive team; he preaches the concept of team success helping move players further along to that level. Because as he helps players make the next level, it sets Reading up nicely for the future, as he continues to try and attract top college talent.

“We’re here to make sure these guys are showcased properly throughout the summer and get every opportunity to put themselves in front of people that can help them come draft time or through the trial process if they don’t get drafted,” Burke said.

And by doing that this summer, Burke hopes to set up another talented group for success in the pro ranks further down the line.

MF Pedro Ribiero, Coastal Carolina: A physically imposing central midfielder, Ribiero has excelled on the flanks, is good with the ball at his feet and can win everything in the air.

F Paul Wyatt, James Madison: Hoping to follow in the footsteps of fellow Duke C.J. Sapong, Wyatt has also provided versatility on the flanks and has chipped in a goal and an assist already.

F Deshorn Brown, UCF: A two-time NAIA All-American at Mobile, Brown is making the jump to Division 1 at Central Florida in the fall and has sparked Reading’s attack so far this summer.

D Tolani Ibikunle, Wake Forest: The undersized center back has shown well thus far this summer and is looking to play a big role for the Demon Deacons stacked roster come the fall.